Which Studio Ghibli Character Are You?

If you enjoy watching movies, you’ve probably heard the phrase “Studio Ghibli” a few times in your life. It’s also likely that it’s been pronounced a few different ways. You might have investigated deeper and found an entire series of quirky animation worlds to fall in love with, or you might have just ignored it. Years later, a group of your friends starts talking about dressing up as a man named No-Face for Halloween, and you have no idea what’s going on.

Maybe you’ve gone back to the other person’s place after a date and saw a little, charming, grey plush toy laying on their bed. Maybe you said, “Hey, cute bear,” only to be met with a nasty sneer and the words, “Actually, that’s Totoro,” followed by something about not letting you near their Catbus now. If only you’d known what the hell that Studio Ghibli business was all about. Don’t worry, we’re here to help.

So before we go into exactly where to start, let’s get some perspective. After all, aside from your terrible social anxiety and dread of missing out, there are plenty of other reasons to get to know Ghibli.

Which Studio Ghibli character are you?

Studio Ghibli is a Japanese animation studio that has produced some of the best feature-length animated films ever made, inspiring countless artists and filmmakers, including John Lasseter (you may recognize him from all those Pixar films that made you cry), who once stated that Ghibli founder “Hayao Miyazaki is the greatest animation director living today.” A very high compliment indeed. Also, you will find out which Studio Ghibli character are you in this quiz.

After collaborating on several animation projects throughout the 1960s, Hayao Miyazaki and Isao Takahata created Studio Ghibli in 1985, following the success of the previous year’s film Nausicaä: Valley of the Wind. They were committed to cultivating a creative climate in which originality and artistic vision trumped financial success – never once taking the easy road and developing a sequel to any of their previous triumphs.

Spirited Away, widely regarded as Miyazaki’s finest, is an astounding feat in animated cinema. A coming-of-age narrative with echoes of Alice’s Adventures in Wonderland and The Wizard of Oz, as well as Ghibli’s signature whimsy, wisdom, and imagination. It follows the narrative of Chihiro, a young girl who is relocating to a new home with her parents. They become disoriented and come across what they thought to be an abandoned amusement park, but it turns out to be a realm inhabited by spirits.

With her parents cursed and Chihiro imprisoned in this weird location, she has no choice but to take work at a secret bathhouse where the clientele consists primarily of wandering beneficent spirits and humans are persona non grata.

Princess Mononoke (Princess Mononoke) (1997)
So, here we are. You’ve probably heard about a slew of fantastic films that celebrate the wonder of children’s imaginations by this time. The finest Studio Ghibli film, on the other hand, is less concerned with inner beauty and more concerned with the wonders that surround us that we are continuously destroying. Princess Mononoke is rife with rage at humanity’s destruction of the natural world, the way we trample over delicate ecosystems for the sake of business, but it is this film’s reluctance to accept easy answers that elevate it to Miyazaki’s masterpiece status.

It’s amazing to consider that My Neighbor Totoro and Grave of the Fireflies were originally released as a double feature because it’s difficult to conceive two more opposed approaches to comparable material. While Grave of the Fireflies takes sadistic pleasure in shattering the illusions of childhood, My Neighbor Totoro preserves and protects that innocence. This video has no narrative, let alone a villain, yet how many kids invent nefarious opponents when daydreaming in the backyard?

Let’s be honest: if you’re reading this ranking, you must already enjoy this film (and if you haven’t seen it yet, it’s a terrific place to start). Spirited Away, maybe Studio Ghibli’s defining film, is the ultimate spiritual odyssey-as-coming-of-age experience. Though many Ghibli heroines are genuine princesses, Chihiro’s relatable everyday humanity allows her to negotiate the supernatural beauties and terrors of Yubaba’s bathhouse.

Isao Takahata’s iconic tearjerker stands out from the rest of Studio Ghibli’s output. This is due in part to the film’s slightly different licensing, which allows Grave of the Fireflies to be viewed on Hulu while the rest is available on HBO Max. In addition, the film is a tragic reversal of the standard Ghibli formula. 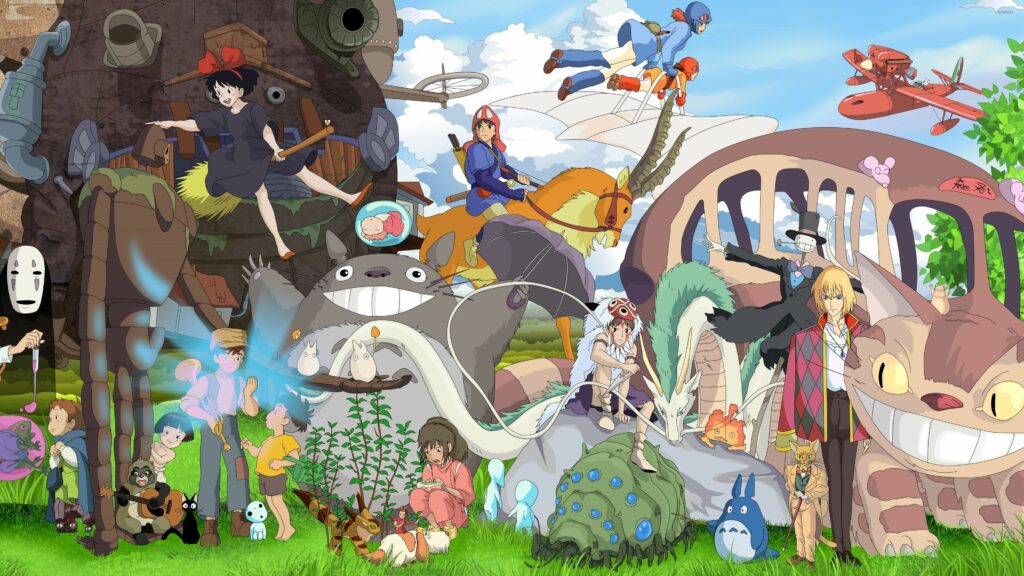