Which Country Song Are You? – Personality Quizzes

Take this which Country song are you quiz to test which song are you? Answer these quick questions to find out. Play it now!

Johnny Cash’s “I Walk the Line”
Cash’s first No. 1 success on the Billboard list remained on the chart for 43 weeks. Cash described the song as a “pledge of loyalty” to his new wife Vivian Liberto, and it was written in one night backstage. NBD.

Dolly Parton’s “Jolene”
This was Parton’s second chart-topper, and it even went over into mainstream music. It’s one of her most covered songs, currently performed by singers who weren’t even born when it was released in 1973, and she’s admitted in interviews that the genuine Jolene is a mash-up of her bank teller and a fan she met at a show.

Garth Brooks’ “Friends in Low Places”
Songwriting pair Dewayne Blackwell and Earl Bud Lee gave this song to a then-unknown Brooks, who took it to No. 1 on the charts and went on to make a reputation for himself in country music.

Which Country song are you?

George Jones’s “Choices”
Jones, who was known as the finest surviving country music performer in his last decades, had no shortage of chart-topping singles during his musical career. This 1999 cover song is one of Jones’ most moving vocal performances. Also, you will find out which Country song are you in this quiz.

Martina McBride’s “Concrete Angel”
McBride’s silky and high-reaching vocals envelop this 2002 song in emotion and violence, telling the heartbreaking story of a young girl living in a horrible environment of torture. With its sobering message, it elevated her girl-power anthems to a new level, and it’s just a darn excellent song.

“Good Morning, Kiss an Angel” Pride, Charley
The late Charley Pride will be regarded as the one and only musician to break through country music’s unbreakable color barrier. But focusing on his difficulties (or, more accurately, the shortcomings of the genre) obscures the fact that he was one of the country’s most gifted songwriters, and one only needs to listen to his biggest hit — the peppy, fiddle-kissed slice of the soulful country — to realize he more than earned his place among the greats through impeccable, raw talent.

Alan Jackson’s “Where Were You?”
Few Americans can answer Jackson’s query in this song: “Where were you on September 11, 2001?” Jackson apparently felt torn about profiting off the tragedy, but wrote the song to process his associated emotions—and survivors and audiences applauded him for it.

Tim McGraw’s “Live Like You Were Dying”
Despite its depressing subject matter, McGraw waxes poetic on the opportunity to actually live life to the fullest in this upbeat, hip-swaying song. The song and video both won awards at the 2004 CMAs and ACMs, and it contains some sound bucket list advice (just ignore the part about bull riding, maybe).

Lee Ann Womack’s “I Hope You Dance”
The touching, passionate homage written by Mark Sanders and Tia Sillers became the soundtrack to father-daughter dances at weddings across the country. Womack first sang the vocals in 2000, winning a Grammy for it.

John Denver’s “Take Me Home Country Roads”
This homage to West Virginia, written in 1971, became Denver’s best-known masterpiece and signature song. Nowadays, it’s the perfect Instagram caption for photos of any old winding road, but back in the day, it peaked at number two on Billboard’s Hot 100 list and spawned dozens of homage covers. 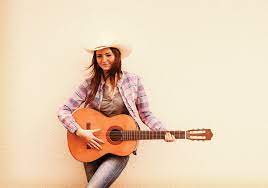