Which Egyptian God Are You?

Take this which Egyptian God are you quiz to test which god are you? Answer these quick questions to find out. Play it now!

One of Egypt’s most significant deities, Osiris, was the deity of the underworld. He also represented death, resurrection, and the Nile flood cycle, which Egypt relied on for agricultural fertility.

According to legend, Osiris was an Egyptian king who was murdered and dismembered by his brother Seth. Isis, his wife, reassembled and resurrected him, allowing them to have a son, the god Horus. He was depicted as a mummified ruler, dressed in wrappings that revealed just the green skin of his hands and face.

The origins of Isis are unknown. Unlike many gods, she can’t be attributed to a specific location, and there are no known mentions of her in the earliest Egyptian literature. She rose in stature over time, finally becoming the most powerful goddess in the pantheon. Isis personified the typical Egyptian characteristics of a wife and mother as the loyal wife who resurrected Osiris after his murder and raised their son, Horus.

Isis, as the wife of the god of the underworld, was also one of the principal deities connected with funeral ceremonies. Isis, along with her sister Nephthys, was a goddess mourner, and her mother’s care was frequently represented as extending to the deceased in the underworld. Also, you will find out which Egyptian God are you in this quiz.

Which Egyptian God are you?

Horus, a sky god linked with war and hunting, was shown as a falcon or as a man with a falcon’s head. He was also the embodiment of divine kingship, and the ruling king was thought to be a manifestation of Horus in some ages.

Horus was the son of Isis and Osiris, produced miraculously after Osiris was murdered by his brother Seth, according to the Osiris myth. Horus was raised to avenge his father’s assassination. According to one legend, Horus lost his left eye in a battle with Seth, but his eye was magically repaired by the god Thoth. Because Horus’ right and left eyes were identified with the sun and the moon, respectively, the loss and restoration of Horus’ left eye provided a legendary explanation for the moon’s phases.

Before the god Amon rose to national prominence in the New Kingdom (c. 1539–1292 BCE), he was worshiped locally in the southern city of Thebes. Amon was a god of the air, and his name most likely meant “Hidden One.” He was typically shown as a guy with a crown and two vertical plumes. The ram and the geese were his animal icons.

After the kings of Thebes revolted against the Hyksos dynasty and reinstalled native Egyptian sovereignty across Egypt, Amon was credited with their victory. In a combined form with the sun god Re, he became Egypt’s most powerful divinity, a position he held for the majority of the New Kingdom.

Bastet, the cat goddess, was originally depicted as a lady with the head of a lion or a wild cat. In the first millennium BCE, she assumed the less ferocious form of a household cat.

Later, she was frequently shown as a regal-looking seated cat, with rings in her ears or nose. During the Ptolemaic period, she became connected with the Greek deity Artemis, the divine hunter and moon goddess.

Thoth, the deity of writing and wisdom, could be portrayed as a baboon, a sacred ibis, or as a man with an ibis’ head. He was thought to have devised language and the hieroglyphic script, as well as serving as a scribe and god’s adviser. Thoth, as the god of wisdom, was supposed to have knowledge of magic and secrets that the other gods lacked.

Anubis was involved with burial rituals and the afterlife. He was frequently shown as a jackal or a man with a jackal’s head. The link of jackals with death and funerals most likely began as a result of Egyptians observing jackals rummaging among cemeteries.

Before Osiris rose to prominence as the lord of the underworld in the Old Kingdom (c. 2575–2130 BCE), Anubis was regarded as the primary god of the dead. Anubis became the patron god of embalmers after embalming and wrapping the body of the murdered monarch, according to the Osiris myth. 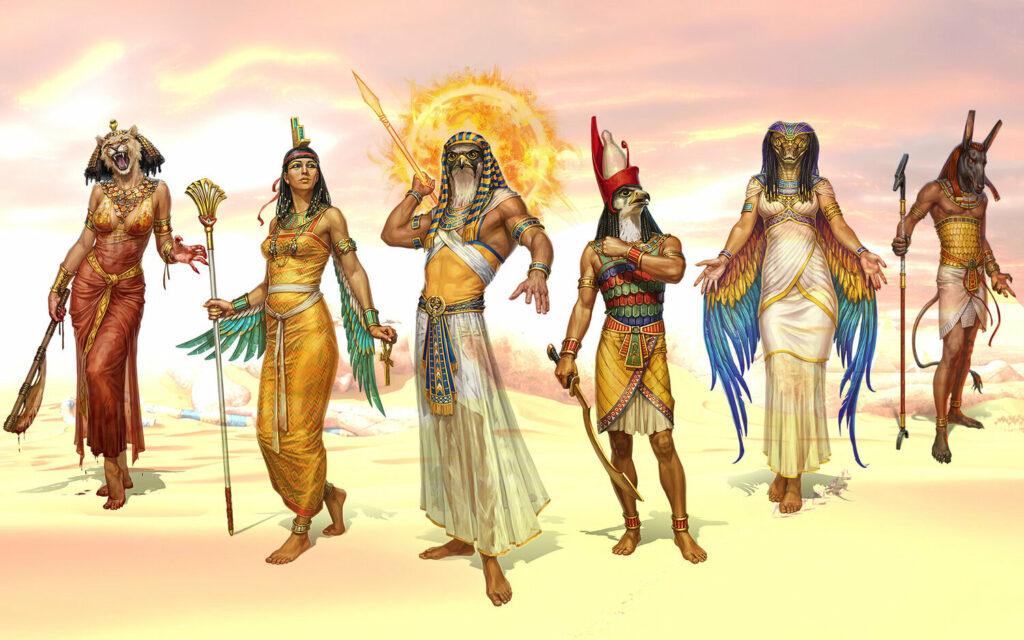