Which Given Character Are You? Given Quiz

Ritsuka Uenoyama and Mafuyu Sato met in an odd place: a high school stairway. It wasn’t love at first sight for them. It was a slow descent, simply a pair of boys struggling with their emotions while plucking their guitar strings and murmuring unfinished compositions.

That is, in essence, the premise of Natsuki Kizu’s Given, a six-volume story about four young guys in an amateur band who learn to love and be loved (so far). In 2019, the manga was converted into an 11-episode anime series of the same name, and a follow-up feature, suitably titled Given The Movie, was recently launched on Crunchyroll.

The film, like the manga and anime that came before it, prioritizes its characters over romance. But that doesn’t make it any less personal. The queerness of the male leads is never questioned or fetishized in Given. The narrative is a clean addition to the Boys’ Love canon, yet it is part of the genre’s modern growth. Given becomes practically radical in the context of its genre. Also, you will find out which Given character are you in this quiz.

Which Given character are you?

Given is a portion of the narrative of Mafuyu discovering his voice — both literally as the band’s frontman and primary lyricist, and metaphorically as a young man who walled himself off from everyone after the death of his boyfriend Yuki, whose guitar he carries with him every day. Mafuyu doesn’t say much, which makes him an ideal counterpoint for hot-headed Ritsuka, who unwillingly teaches him how to play the guitar and encourages him to join the band he formed with bassist Haruki and drummer Akihiko, two college students who are dancing around their own sexual tension. Kizu crafts a world that seems lived in, and her characters appear to be genuine people. Yes, it’s a slow burn, but it’s also straightforward in a way that BL, or “Boys’ Love,” isn’t typically presented. Confessions aren’t always explosive or combustible; they can be calm realizations and clumsy kisses as well.

“I wanted it to have a realistic feel,” Kizu, a writer and illustrator, told Pash! in 2019. Kizu had become well-known for her doujinshis, or sensual fan works. “Because BL is a fantasy, let us support it with a realistic foundation.”

BL’s fantasy begins with its conception. “Boys’ Love” is a Japanese manga, anime, and media genre that focuses on romantic relationships between young men. In the West, it is commonly referred to as yaoi, a phrase that originated as a joke among mangaka in the late 1970s as a combination of Yama nashi, Ochi nashi, Imi nashi (“no climax, no goal, no meaning”) – a reference to works that prioritized sex above substance. Yaoi, on the other hand, is classified as a more explicit subset of Boys’ Love, a term coined in the 1990s.

We settled in to watch a simple Boy Love anime during a communal viewing event. As a result, we expected to hear the characters shout “now kiss” several times into our microphones when they were close to kissing, but they never did. We expected to continuously ship characters and get stirred up anytime a love triangle formed. To tell the truth, we did those things. But then came episode nine, and what was previously a lively chat full of jokes and shipping conversations became silent, followed by sobs.

To comprehend this shift in a given, you must first comprehend how it occurs. In the first episode, Mafuyu is not a member of the band, which consists of Ritsuka, Haruki, and Akihiko. He’s alone in a major high school, carrying on with his life following his boyfriend Yuki’s death, which we’re led to believe was a suicide. We learn at the beginning of the novel that Mafuyu discovered his boyfriend’s body after a quarrel and is now clutching onto Yuki’s guitar and learning to play it. While this is a strong emotional start, the rest of the episodes follow the standard anime romance rhythms.

There are occasions when Mafuyu’s trauma comes to the surface, such as when he tells Ritsuka that he has trouble exhibiting the correct emotions at times, or when he stumbles backward after a former buddy approaches him in the street and inquires about Yuki’s guitar. Despite the fact that we see Mafuyu’s anguish at times, the comedic and romantic parts of the story take center stage. Mafuyu is shy, and his inability to create and communicate his lyrics drives the plot forward. 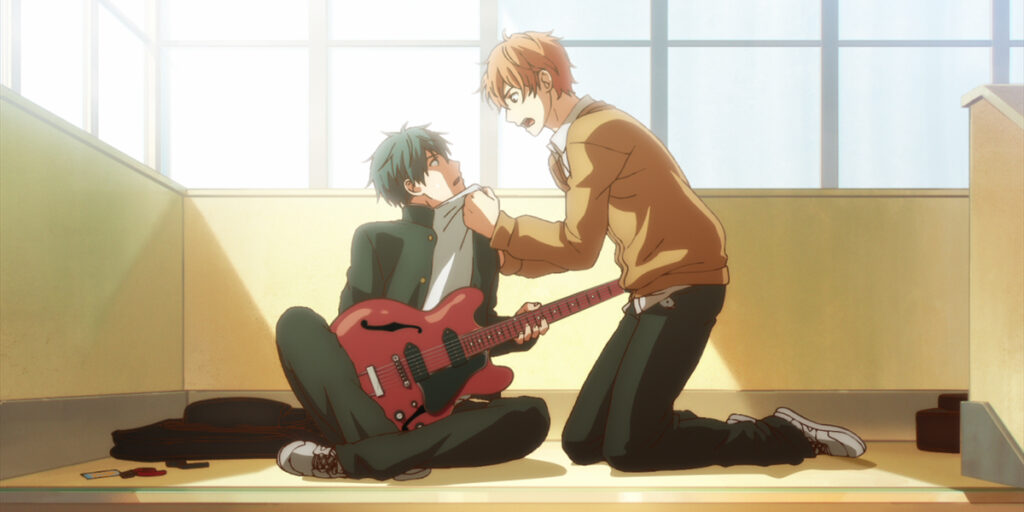