Which Mamamoo Member Are You?

MAMAMOO is made up of four extremely skilled members that have incredible chemistry as a group. They’ve worked together to be exemplary examples of a variety of abilities, and they continue to impress with everything they have to offer as idols! Each member of MAMAMOO was discovered and signed to RBW Entertainment in the following ways.

Solar is the group’s eldest member, leader, and main vocalist!

When she was 20, she was training to be a flight attendant and stopped one day to sign up for a free present. She had to sing for the gift to receive it, which is when an RBW Entertainment (previously WA Entertainment) agent discovered her potential and, following a successful audition, signed her up as a trainee in 2011!

She attended Modern K Music Academy University after being scouted. Solar trained for over three years, concentrating on vocals, before making her debut with MAMAMOO in 2014. Also, you will find out which Mamamoo member are you in this quiz.

Which Mamamoo member are you?

Moonbyul is the second-oldest member and serves as both the main rapper and the lead dancer!

Moonbyul has a rich history of music education. She auditioned for several agencies and was accepted by a number of them! Before joining RBW Ent, Moonbyul and fellow member Wheein worked in the same agency, where Moonbyul was the leader and Wheein was the maknae. However, the group only lasted a week before they all parted ways.

She subsequently auditioned for RBW Entertainment and was accepted as the last trainee among the four members of MAMAMOO, a month after Solar. She attended the Paekche Institute of the Arts for media, music, and singing after joining the agency. She began her training in vocals as a trainee but then switched to rap after Solar advised she may do well in that sector. After three years of training, she made her debut as MAMAMOO’s primary rapper and dancer in 2014!

Wheein is the group’s principal vocalist and dancer!

Wheein, like Moonbyul, was a trainee before joining RBW Entertainment. MBK Entertainment is one of the well-known agencies where she trained. She had previously met fellow member Moonbyul at another agency, where they were both members of the same trainee team that tragically only lasted a week.

Wheein and Hwasa have known each other since middle school, and they both aspired to be vocalists. They both moved from Jeonju to Seoul together, and after training at various agencies, they both ended up at RBW Entertainment as the first two MAMAMOO trainees in 2011. Wheein attended J Music Vocal Academy after joining the agency. Wheein also trained for three years before making his MAMAMOO debut in 2014.

Hwasa is the group’s lead vocalist, rapper, and maknae!

Hwasa and Wheein had been pals since middle school. The two quickly relocated from Jeonju to Seoul to pursue their aspirations of becoming singers. Wheein received training from various agencies, and Hwasa did the same while also recording guide vocals for 4MINUTE.

Hwasa and Wheein joined RBW Ent as trainees together in 2011, becoming the first two MAMAMOO members to do so. Hwasa trained for three years alongside the other two members, specializing in vocals and rap, before debuting as MAMAMOO’s lead rapper, vocalist, and maknae in 2014! 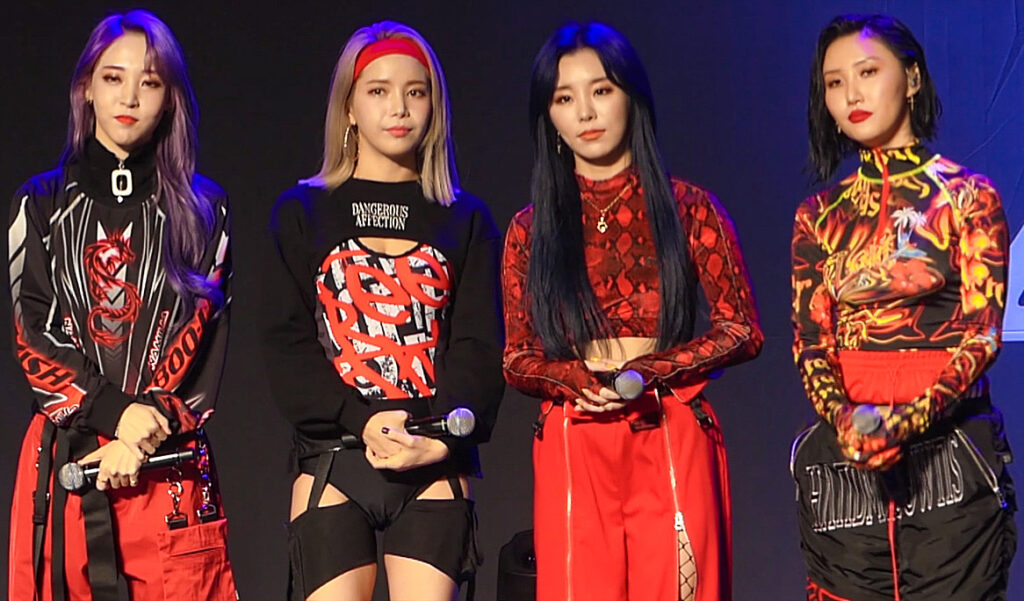