Highschool Of The Dead Quiz – Which Character Are You?

Take this Highschool Of The Dead Quiz to find out which character you are. We update the quiz regularly and it’s the most accurate among the other quizzes.

In July 2010, Highschool of the Dead (Gakuen Mokushiroku Hai Sukru Obu Za Deddo) was released. It belongs to the Action, Horror, Supernatural, Ecchi, and Shounen genres. The anime is based on a manga by Daisuke Sat.

Highschool of the Dead Anime Synopsis:

It’s just another day at Fujimi Academy, a residential school in the Tokonosu Prefecture near Tokonosu City. Komuro Takashi (one of the main characters) was standing near the school’s stairway, watching something strange happen at the front gate.

At first, it was unclear what was going on, but then a zombie bites one of the students, and Komuro becomes concerned and rushes to his friend (Miyamoto Reiclass )’s to get her out. By the time they get outside, Rei has been attacked by a zombie, which she fights with all her might, but one of their friends has been bitten by a zombie.

Ignoring the fact that their friend was bitten, they continue on their way and wind up on the school’s terrace. Meanwhile, the entire school has been bitten by zombies, and some of the other important characters are still fighting zombies within the school. Also, you must try to play this Highschool Of The Dead Quiz.

Highschool Of The Dead Quiz

Now some zombies appear on the terrace and begin attacking Komuro, Rei, and their bitten companion. They struggle their way up to the highest point of the terrace, and as they arrive, Komuro notices their comrade turning into a zombie. But, out of concern for Komuro and Rei, their friend requests that Komuro kill him. After taking care of everything on the terrace, Komuro and Rei immediately go on to the bottom floor of the school, where they meet the rest of the anime’s important characters. From there, everything begins.

Plot: When students at Fujimi Academy were unaware that Japan was in the grip of a devastating zombie apocalypse, they were caught off guard. Then, within a day, the outbreak’s effects worsened, transforming all of the students into dead creatures (zombies). Komuro and his friends manage to break out of school and make their way to see if any of their parents are still alive.

After spending some time on the roads trying to figure out how to deal with this problem, they notice that most people have turned into zombies and the city is in complete chaos and devastation. They encounter numerous challenges on their voyage and adjust their plans in response to changing circumstances.

Saeko Busujima is a third-year Fujimi Academy student and the daughter of Master Busujima. Saeko is the Captain of the Kendo Club, hence she is the most skilled and dependable fighter in the group. During each fight, she used the sword as a weapon to dispatch the awful undead.

Kouta Hirano is a second-year student at Fujimi Academy who is frequently tormented at school. Hirano is a gun otaku (enthusiast) with extensive knowledge of weapons and military equipment. He employs his marksmanship to dispatch every last zombie in his path.

Takashi Komuro is a second-year student at Fujimi Academy who is always willing to risk his life to save others. Takashi is skilled in melee combat and has studied firearms from Kouta. While fighting zombies, he uses his strong leadership ability to lead everyone to safety.

Shizuka Marikawa: Shizuka Marikawa is an important member of Fujimi Academy who is always concerned about everyone’s well-being. Shizuka is a master at using medical expertise to treat anyone who has been hurt. She uses her compassionate heart to assist everyone in need of health care.

Rei Miyamoto is a second-year student at Fujimi Academy and Takashi Komuro’s childhood friend since kindergarten. Rei is a valuable asset in warfare, although he subsequently switches to utilizing a rifle as a weapon. She used her keen senses to dispatch any undead with her M1A1 Rifle.

Saya Takagi is a second-year Fujimi Academy student and Kouta Hirano’s classmate. Saya is skilled at devising methods and identifying a person’s flaws. If necessary, she employs her strategies, as well as a pistol, to dispatch zombies. 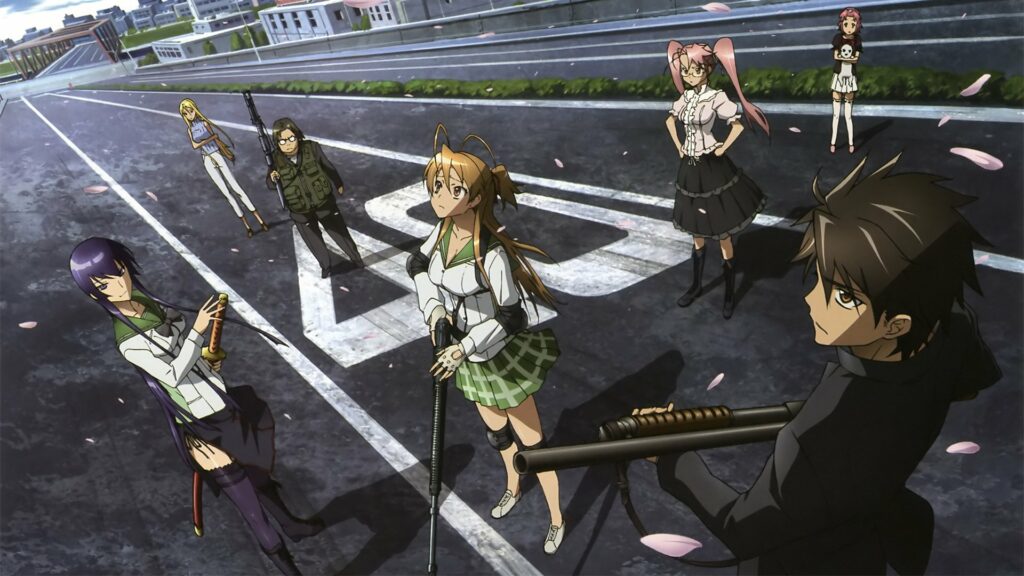