Which TXT Member Are You? – Personality Quizzes

Take this which TXT Member are you quiz to test which member are you? Answer these quick questions to find out. Play it now!

Soobin was the second TXT member to be unveiled, as well as the second oldest TXT member. Despite not being the eldest, Soobin is the leader of TOMORROW X TOGETHER, which means he bears a great deal of responsibility.

Soobin has also revealed the existence of an older sister and an older brother. Sean, a long-haired chihuahua, is also a member of his family.

Soobin claimed that during his audition for Big Hit, he was so nervous that his microphone trembled and he misheard the lines. So he went home that day and got himself five ice cream cones to make himself feel better. However, he eventually chose to send in another audition by email, which happily worked out well for him in the end.

Yeonjun was the first member of TXT to be announced by Big Hit, and he is also the group’s oldest member. He has incredible dance abilities that astound people, and he is also a highly good singer and rapper. Also, you will find out which TXT member are you in this quiz.

He is the only TXT member that is an only child. He also spent his formative school years in the United States, which is why he speaks English fluently. Yeonjun is usually the one who takes the lead when the group is writing messages for international fans!

Which TXT Member are you?

Yeonjun was the group’s longest-serving trainee, having been with Big Hit for four years prior to their debut! Prior to joining Big Hit, he auditioned for Cube Entertainment, and he auditioned by dancing to BTS’ “Boy In Luv”!

Beomgyu was the fifth TXT member to be announced. At the age of 18, he is sandwiched between the two senior members (Yeonjun and Soobin) and the two younger members (Huening Kai and Taehyun). He is supposed to give the group a “bright and lively aspect.”

He has two older brothers and owns a parrot named “TOTO.” Beomgyu hails from Daegu, as do BTS members Kim Taehyung (V) and Min Yoongi (Suga). He can also play the guitar, which he demonstrated at his audition for Big Hit.

The young musician also revealed that he was cast by Big Hit, but when they asked him to travel to Seoul for an audition, he refused due to exams. So they arranged for him to audition in Daegu instead, and the rest is history!

Taehyun was the fourth TXT member to be announced. He is supposed to bring the group a “cool, free-spirited charm.” He has an older brother and a sister.

Taehyun used to appear in ads as a child, including ones for an English tutoring organization, which is why he speaks English fluently. He’s a low-key genius who seems to have no trouble picking up new talents.

Taehyun appears to have a calmer energy than some of the other lads in the group, based on what we’ve seen so far. He’s more laid back than the group’s leader, Soobin. Taehyun’s members frequently refer to him as the group’s brain. In addition to being mature and sensible, he has a confident sense of humor that distinguishes him from his fellow members.

Huening Kai is the group’s maknae (youngest member) and the third member of TXT to be introduced by Big Hit! He looks to come from a musical family, as he has two sisters.

As the group’s baby, it’s no wonder that he’s believed to provide a “refreshing and innocent appeal” to the ensemble. He is also Big Hit’s first international performer, being a Korean-American! 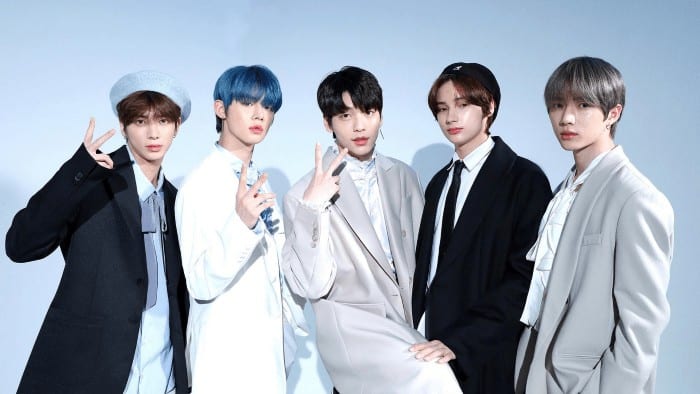