The Cat In The Hat Quiz – Trivia Quizzes

Take this The Cat In The Hat Quiz to find out how well you remember the book. We update the quiz regularly and it’s the most accurate among the other quizzes.

On a cold, rainy day, Sally and her unnamed brother sit and stare out a window. The children are alone and bored because their mother is away. The Cat—a tall, flamboyantly dressed, anthropomorphic cat—enters the house with a loud and sudden thump, greets the children, and offers to show them some fun games and tricks. While the Cat claims that the children’s mother would welcome his visit, the children remain silent, unsure how to respond to the Cat’s offer in the absence of their mother. “He should not be here/When your mother is out!” exclaims the children’s pet fish, leaping from his bowl and urging Sally and the boy to force the Cat to leave. (52-53).

The Cat demonstrates his first trick to Sally and the boy: an elaborate balancing act involving several household items. The Cat stands on a ball, holding a book, a glass of milk, a toy ship, a fan, and a cake, with the fishbowl propped on top of the umbrella. He begs for the children’s attention so they can learn how to have fun, but he quickly loses his balance and falls, knocking all the items to the floor. The fish, enraged by the mess, demands that the Cat leave. Also, you must try to play The Cat In The Hat quiz.

The Cat In The Hat Quiz

Instead, the Cat brings in a large box and releases Thing 1 and Thing 2, two identical beings with poofy blue hair and matching red jumpsuits. After shaking the children’s hands, the Things fly kites inside the house, knocking over most of the furniture. “I do NOT like the way they play,” the boy exclaims, “If Mother could see this,/Oh, what would she say!” (223-225).

Suddenly, the fish notices the children’s mother approaching the front door, prompting the boy to track down and capture the Things with a net. With his newly gained confidence, the boy demands and successfully convinces the Cat to leave. The fish, Sally, and the boy begin to panic because, even though the Cat and the Things have vanished, the house remains in complete disarray and chaos. The fish is concerned that they will not have enough time to clean the house before their mother returns, but the Cat appears unexpectedly with a vehicle that quickly cleans, dust, and replaces all of the items in their original locations. The Cat says his final goodbyes.

Sally and the boy return to their chairs by the window, relieved and overjoyed at the restored house. Back at home, the children’s mother inquires about their day and whether they had a good time. The children are at a loss for words, so the boy—also the book’s narrator—asks the audience, “Now what SHOULD we do?/Well…/What would YOU do/If your mother asked YOU?” (306-307).

About the The Cat In The Hat quiz

The mischievous, human-like Cat introduces Sally and her brother to a new, fantastical world full of fun and chaos as the book’s most complex and fully realized character. The Cat’s balancing act and discovery of the Things violate many of the social norms enforced in the children’s home, as evidenced by the fish’s frequent, passionate dismissals of his presence. The Cat’s intentions are not misguided or inappropriate, despite embodying chaos and anti-authoritarianism. He simply wants to show two children, who have succumbed to boredom due to the rain and their mother’s absence, how to entertain themselves with everyday items in their home.

Sally’s older, unnamed brother guides us through the events of the story as the narrator, frequently pausing to provide insights into the unfolding story. At the start of the book, the boy and Sally sit in their chairs, staring out the window.

The fish, as a symbol of order and compliance, fills the void left by the absence of the children’s mother. He is nagging, dismissive, and constantly expresses his displeasure with the Cat, fearful that the Cat’s actions will cause chaos and disarray in the house.

During the rainstorm, the younger, silent Sally joins her brother in aimlessly staring at the rain, rather than coming up with creative ways to entertain herself indoors. Unlike her brother, however, Sally’s distinguishing feature—her unassuming passivity—continues throughout the novel. Sally, for example, does not take any action, even at the story’s climax. 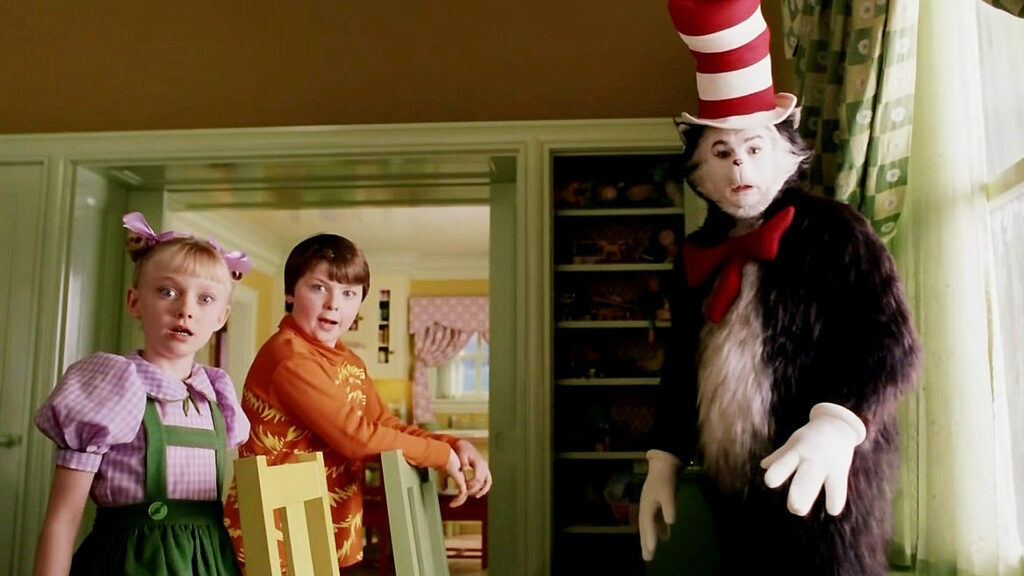