Merlin Quiz – Which Character Are You?

Take this Merlin Quiz to find out which character you are. We update the quiz regularly and it’s the most accurate among the other quizzes.

Merlin is sent to Camelot by his mother, who wishes for her gifted son to learn how to control his abilities. When our young wizard arrives, he watches a guy being hanged for using sorcery, which forces him to tread carefully. Within his first few days at Camelot, he rescues a manservant from the heir-to-the-throne Prince Arthur Pendragon, meets the Momentous Dragon, and learns of a great destiny that awaits him. Isn’t it all in a day’s work?
Nimueh, an exiled sorceress, serves as the season’s main antagonist. Other opponents, such as Knight Valiant with his magical shield, the raider Kanan, and a Questing Beast born of a long-dead king’s nightmares, flit in and out of Camelot.

This season is primarily concerned with the themes of life and death, as well as introducing new renditions of characters from Arthurian legend. Despite the fact that I can’t watch Anthony Stewart Head (who plays King Uther Pendragon) without imagining him as Rupert Giles from ‘Buffy the Vampire Slayer,’ the character interactions allow for some fascinating interplay. Also, you must try to play this Merlin Quiz.

Aside from portraying Merlin as a young man and Arthur not being a stable lad needing to retrieve a sword from a stone, the differences between the legends are significant. For one thing, Guinevere is a servant girl in Camelot, and her attraction to Arthur is frowned upon due to their social class inequalities. Morgana begins the story as a good character who is disturbed by bad dreams and warns Arthur several times as a result of them. Finally, Mordred is introduced as a druid’s apprentice. For those who are unfamiliar with Arthuriana, Mordred was traditionally the son of Arthur and his sister Morgana. He also assassinated King Arthur. Finally, Lancelot, who is usually Arthur’s closest companion on the Knights of the Round Table, is a commoner in this series.

In the first season, Merlin also begins to accept his powers, despite opposition from the Old Religion and other forces seeking to destroy both him and Arthur. Merlin saves his mother, Gaius, and Arthur in the season finale, while also defeating the sorceress Nimueh and making an enemy of the Great Dragon trapped underneath Camelot. Again, it’s all in a day’s work, right?

The second season begins with a thief stealing a jewel containing a malevolent sorcerer’s soul. In order to rescue the country, Merlin strikes a deal with the Great Dragon, promising to release the beast one day. Camelot is rescued in the near term as a consequence of this pact, but it is a devil’s bargain that will come back to haunt them sooner or later.
We also get to observe the primary characters’ relationships evolve throughout the course of the season. Specifically, despite their social class differences, Arthur and Gwen become closer as a pair. In this version of the narrative, Gwen is a servant. As a result of this loss in status, Gwen is left at the mercy of an outlaw at one point because Uther refuses to stage a rescue or pay a ransom for a “mere servant.”

This episode focuses on the Arthur-Guinevere-Lancelot love triangle, as Gwen is imprisoned after being mistaken for Morgana. Arthur and Merlin arrive to save Gwen, but during this sequence of events, we see Lancelot and Gwen grow romantically closer. Arthur, of course, confesses his emotions for Gwen (to Merlin, not to her), and when Lancelot realizes this, he Skidoos out of there, leaving Gwen bemused by his abrupt departure.

Morgana, on the other hand, is becoming increasingly agitated by her dreams during the season. She wants to go live with the druids and learn more about her skills, but poor foolish Arthur kills all the druids because he thinks they kidnapped Morgana. Needless to say, this does not go down well. Mordred swears vengeance for his village’s destruction, and another chapter of the saga is set in action. 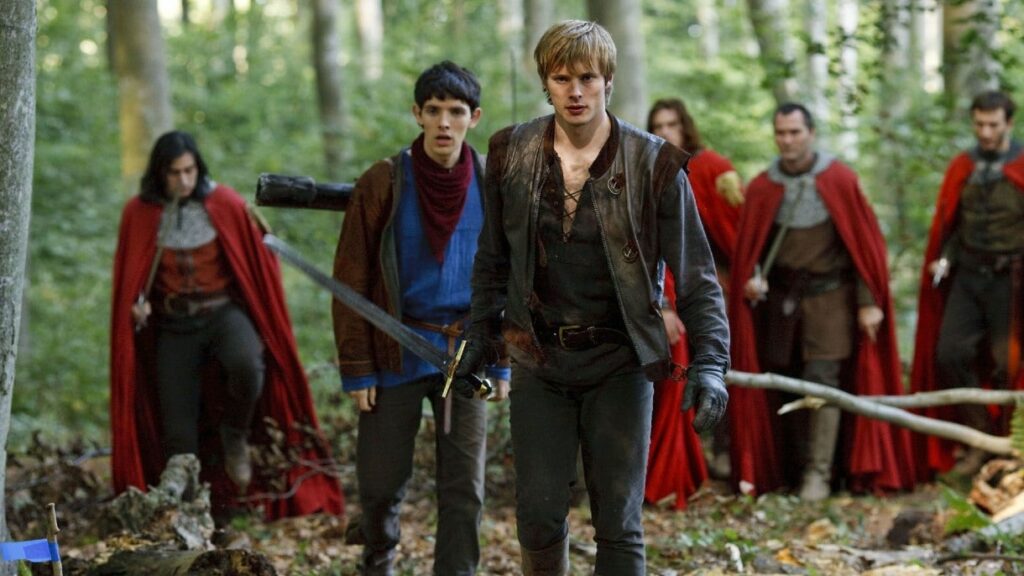