Take this George Washington Quiz to find out how well you know him. We update the quiz regularly and it’s the most accurate among the other quizzes.

George Washington (1732-99) was the commander-in-chief of the Continental Army during the American Revolutionary War (1775-83) and the first President of the United States from 1789 to 1797. Washington was raised in colonial Virginia as the son of an affluent landowner. He worked as a surveyor as a young man before fighting in the French and Indian War (1754-63).

He led the colonial armies to victory over the British during the American Revolution and became a national hero. He was elected president of the convention that drafted the United States Constitution in 1787. Washington was elected as America’s first president two years later. Recognizing that how he handled the job would influence how future presidents tackled it, he left a legacy of strength, integrity, and national purpose. He died at his Virginia property, Mount Vernon, at the age of 67, less than three years after leaving office.

George Washington was born on February 22, 1732, at his family’s property on Pope’s Creek in Westmoreland County, Virginia, to Augustine Washington (1694-1743) and Mary Ball Washington, his second wife (1708-89). George, the eldest of Augustine and Mary Washington’s six children, grew up on Ferry Farm, an estate outside Fredericksburg, Virginia. Washington most likely assisted his mother in running the property after his father died when he was 11 years old. Also, you must try to play this George Washington Quiz.

Did you know that? George Washington owned over 300 enslaved individuals at the time of his death in 1799. However, before his death, he had turned anti-slavery, and in his will, he directed that his enslaved employees be liberated upon the death of his wife.

Little information regarding Washington’s early schooling is available, but children from wealthy families, such as his, were often taught at home by private tutors or attended private schools. He is thought to have completed his official education around the age of 15.

Washington, who had demonstrated an aptitude for mathematics as a teenager, became a successful surveyor. His surveying forays into the Virginia woods provided him with enough funds to begin acquiring his own acreage.

In 1751, Washington moved to Barbados with his older half-brother Lawrence Washington (1718-52), who was suffering from tuberculosis and believed that the warm temperature would help him recover. George got smallpox not long after they arrived. He survived the sickness, but it left him with lasting facial scars. Lawrence, who was trained in England and acted as Washington’s tutor, died in 1752. Lawrence’s estate, Mount Vernon, on the Potomac River near Alexandria, Virginia, was eventually inherited by Washington.

Washington, who had no prior military training, was appointed head of the Virginia militia in December 1752. During the French and Indian War, he saw action and was eventually given command of all of Virginia’s militia forces. Washington resigned his post in 1759, returned to Mount Vernon, and was elected to the Virginia House of Burgesses, where he served until 1774. He married Martha Dandridge Custis (1731-1802), a wealthy widow with two children, in January 1759. Washington became a loving stepfather to her children; he and Martha Washington never had their own children.

In the years afterward, Washington has grown Mount Vernon from 2,000 acres to an 8,000-acre estate with five farms. He farmed a range of crops, including wheat and corn, bred mules, and had fruit orchards and a profitable fishery. He was passionate about farming and was constantly experimenting with new crops and land conservation strategies.

With the signing of the Treaty of Paris between the United Kingdom and the United States in 1783, Washington relinquished command of the army and returned to Mount Vernon, intent on resuming his life as a gentleman farmer and family man. However, in 1787, he was requested to join the Constitutional Convention in Philadelphia and chair the committee tasked with writing the new constitution. His commanding presence there persuaded the delegates that he was by far the best-qualified guy to be the nation’s first president.

Washington resisted at first. He yearned to return to a quiet life at home and delegate authority over the new nation to others. But public opinion was so powerful that he eventually caved. On January 7, 1789, the first presidential election was held, and Washington easily won. John Adams (1735-1826), who garnered the second-most votes, was elected as the country’s first vice president. On April 30, 1789, Washington, then 57, was sworn in as President of the United States in New York City. He lived in New York and Philadelphia since Washington, D.C., America’s future capital city, had not yet been created. During his presidency, he signed legislation establishing a future, permanent U.S. capital along the Potomac River, which was eventually renamed Washington, D.C. in his honor. 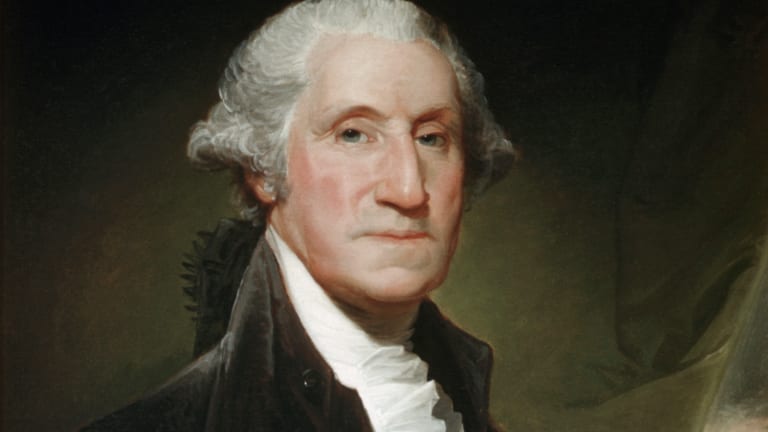