Against The Ice Quiz – Which Character Are You?

Take this Against The Ice Quiz to find out which character you are. We update the quiz regularly and it’s the most accurate among the other quizzes.

At least two sled dogs are killed about a half-hour into the delightfully pulpy Icelandic-Danish survival adventure “Against the Ice.” I wouldn’t be surprised if the film’s creators, particularly star/producer/co-writer Nikolaj Coster-Waldau (Game of Thrones Jaime Lannister), killed more dogs off-screen in a deleted or unfilmed scene. Given the film’s focus on two Arctic explorers who ventured out to the known edge of Greenland in 1909 and then tried not to die in the middle of nowhere, that’s the highest compliment I can think of.

“Against the Ice” has all the delirious period drama thrills and survival horror angst you could want from a title like that. Within a short period of time, Coster-Waldau and Joe Derrick established their story—an adaptation of Arctic explorer Ejnar Mikkelsen’s memoir Two Against the Ice—as the kind of grisly and high-toned boy’s adventure story where the worst can and will happen, especially when you’re not expecting it. Also, you must try to play this Against The Ice quiz.

Against The Ice Quiz

Coster-Waldau plays Mikkelsen, the haunted sea captain who leads poor naive mechanic Iver Iversen (Joe Cole) on a perilous journey to a cairn (or, as one character helpfully explains, a “stack of stones one can see from afar”) far away from their ship, Alabama, and its crew. A written record of the findings of the last Danish expedition is buried within this cairn. That prized document implies unequivocally that Danish explorers, rather than American adventurer Robert Peary, discovered Greenland’s northernmost border, implying that the US “has no claim” in the Arctic, as Mikkelsen explains to Iversen.

You may be wondering how or why proving this extremely specific claim could be the goal of an Arctic-set action-adventure about two men who must kill a sled dog or two to survive. Derrick and Coster-Waldau set the tone for the film right away with campy and economic dialogue, such as when another explorer warns Iversen not to befriend the dogs because, if worst comes to worst, you must “shoot the worst dog” and “feed it to the others.” Soon after, Iversen rashly declares, “Once you learn to trust your lead dog, it all kind of falls into place.”

That kind of obvious irony may put you on edge long before the first dog-related incident. You might also be hooked and/or desperate to stop watching after the brutally unsensational second incident, which adds a hilariously foreboding edge to even the most innocent-seeming dialogue exchanges, such as when Mikkelsen says that “Denmark will thank you one day, Iver Iversen,” and then announces, after they find the cairn they’re looking for, that they’re heading back to Alabama and then off to “home sweet home.” This is before the icicles form in Iversen and Mikkelsen’s beards. Following that, they bond like any other turn-of-the-century man would, by discussing their first sexual experiences or whether they’d ever consider cannibalism (Spoiler alert: they would).

To be fair, “Against the Ice” does have some tense and well-paced set pieces, as well as some lovely, atmospheric outdoor photography (lensed by Danish cinematographer Torben Forsberg), some of which were shot in Greenland. Cole and Coster-Waldau are also excellent in their respective roles, despite the fact that they aren’t the film’s true stars. Well, Coster-Waldau obviously is, given his multi-hyphenate role in completing the film as it is. But not for his performance on camera. As a screenwriter, Coster-Waldau (and Derrick) pack every scene with the kind of gruesome and unexpected details that will delight fans of airport paperbacks and/or B-movie suspense.

Don’t be fooled by the low budget: “Against the Ice” constantly reminds you of what kind of film it is, and not just when computer-animated polar bears attack or when the prim, but blessedly hammy character actor Charles Dance (Tywin Lannister on “Game of Thrones”) appears in character as a Danish cultural minister and makes pronouncements about the fate of Iversen and Mikkelsen from the safety of a (probably well-heated) conference room. Dance makes a meal of the word “lieutenant” and also delivers an excellent monologue, such as when describing an explorer’s “single most important task.” “Blood, sweat, and tears” are obviously involved. 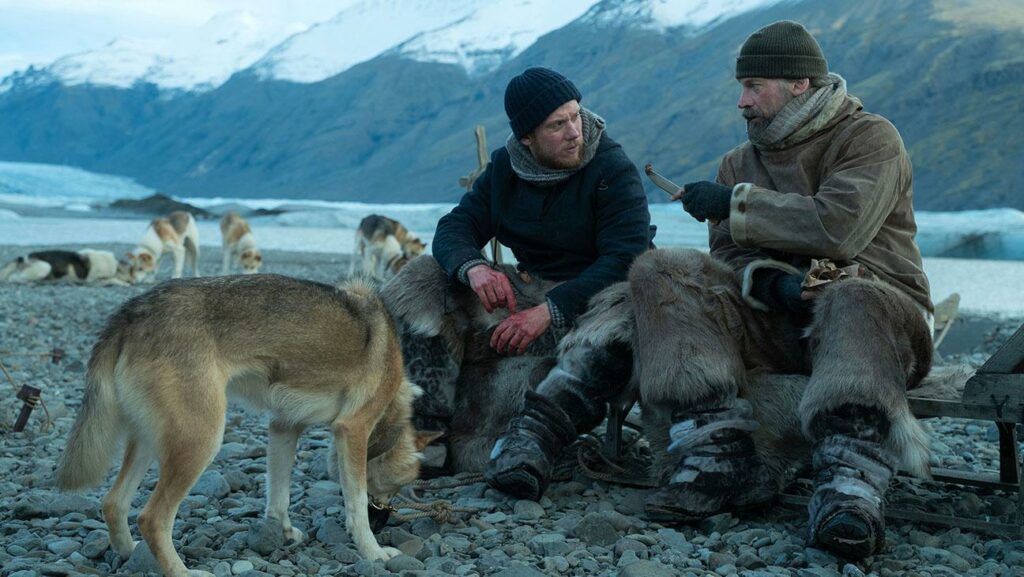