Kagami Yoshimizu’s Lucky Star is a Japanese four-panel comic strip manga. Since January 2004, the strip has been in Kadokawa Shoten’s Comptiq magazine. There were also cameo strips in other magazines, such as Shonen Ace, and other publications. It has no overarching plot and concentrates on the characters’ daily lives.

There was a drama CD based on the series in August 2005, and a Nintendo DS video game, Lucky Star Moe Drill, was released in December 2005. Shin Lucky Star Moe Drill, a sequel for the DS, was released in May 2007, and a visual novel for the PlayStation 2 was released in January 2008. Kyoto Animation announced in September 2006 that it will be animating a 24-episode anime based on the show. On Chiba TV in Japan from April 8 to September 16, 2007, it aired for the first time. Other networks showed it at the same time.

Which Lucky Star character are you?

This is the general gist of the story. I know what you’re thinking – there is absolutely no plot at all. It’s understandable that you’d want to know why this series is so popular and adored not just in the anime community, but around the world. Well… there isn’t exactly an answer to that. I’m a Lucky Star fan and the only way to truly appreciate this series is to see it yourself. Of course, it may appear absurd. You can ask every lucky star fan and they’ll say “moe” or anything close. When you ask, “What’s up with that?” Say I will write a “My Thoughts On” about it in the future.

Kyoto Animation is responsible for the show’s animation; they’re not famous for how many series they’ve animated, but for which series they’ve animated. Among their many works are The Melancholy of Suzumiya Haruhi, Clannad, and K-ON! Several well-known voice actors appear in the series, including Aya Hirano, who plays Konata, as well as Haruhi and Lucy Heartfilia from The Melancholy of Suzumiya Haruhi…. Lucky Star’s success made Aya Hirano famous for her unique voice of Konata, and Emiri Katou’s portrayal of Kagami made Emiri Katou famous (also known as the voices of Shiranui from Medaka Box and Hachikuji Mayoi from Nisemonogatari). Also, you will find out which Lucky Star character are you in this quiz.

Psychic twins really do have a link, do they? Do guys who like moe (cute) girls hang out together? queries of this nature might occur in Konata Izumi’s inquisitive mind as she is a super fan of anime. Even when she’s not immersed in one of her favorite manga or online games, she continues to ponder the deepest questions about the cosmos with her favorite companions. She doesn’t blame her friends for not having the same appreciation for anime clichés and trivia as she has. Even if she is a moe dream girl, she has Tsukasa and Kagami to look after her (even if Kagami insists on being totally tsundere about it). On the other hand, Konata searched everywhere, but she could not locate a better set of friends that could help her make it through high school.

There are a lot of bright and colorful colors in the series, which have become synonymous with the Moe (extremely adorable) anime. In addition, the parodies are intended to be recognizable as closely as possible to the source material. The quality of the animation used in the series allows for flawless recreations of video games and other anime. 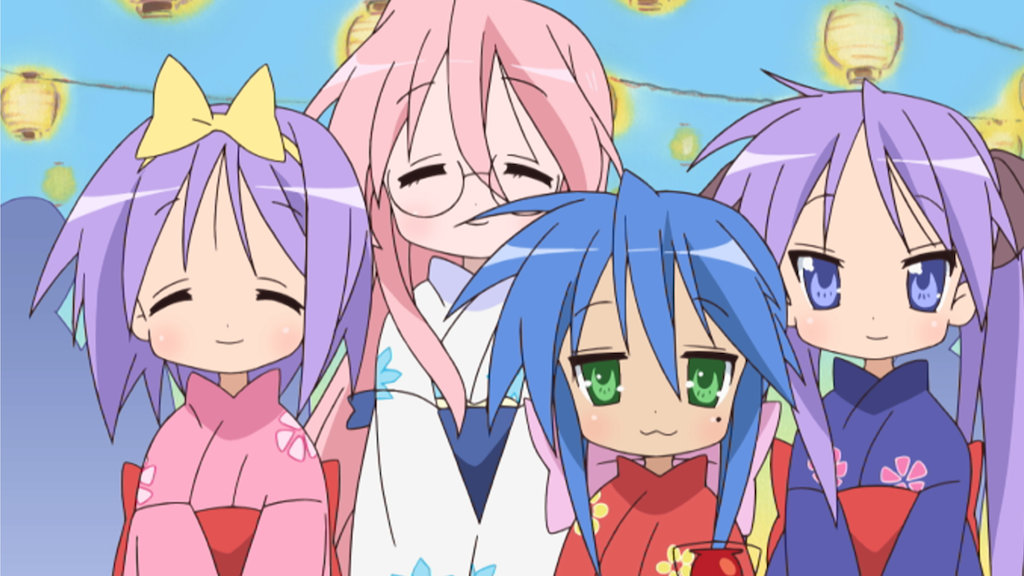