Which Evan Peters Ahs Character Are You?

Take this Which Evan Peters Ahs Character Are You quiz to find out. We update the quiz regularly and it’s the most accurate among the other quizzes.

Evan Peters has been in more seasons of FX’s “American Horror Story” than any other male actor, except for Season 9, “AHS: 1984.” (Sarah Paulson follows in his footsteps as a female actor.) Peters returned to “AHS” during the long-awaited pandemic-delayed Season 10, “Double Feature: Red Tide,” after earning an Emmy this year for HBO’s “Mare of Easttown.” Almost all of his characters have stayed with fans over the last decade (we’ll pretend Jeff Pfister didn’t exist). But what are his ultimate highlights? We’ve whittled the list down to Evan Peters’ five finest “American Horror Story” characters of all time. Do you agree or disagree with our choices? Please share your thoughts in the comments area.

Kai Anderson (from “Cult”) — Peters received lead actor honors at the Critics Choice Awards and our own Gold Derby Awards for his work as an alt-right-inspired cult leader with blue hair and a Cheetos obsession. “Cult” was an unusual edition in that it relied on actual shocks (killing clowns, killer bees, and killer cult members) rather than otherworldly horrors, making Kai even more terrifying. Can you see this hulking egomaniac as your next-door neighbor? Also, you must try to play this Which Evan Peters Ahs Character Are You quiz.

Which Evan Peters Ahs Character Are You?

Tate Langdon (Murder House and Apocalypse) — Tate, the original ghost with a golden heart, was fans’ first introduction to Peters in the first season of “American Horror Story.” We couldn’t get enough of Tate’s love story with Violet, despite the fact that he was a sociopath who died while shooting up his school (Taissa Farmiga). Viewers were reunited with the lovebirds nearly a decade later when the witches from “Apocalypse” visited the “Murder House” to discover how to kill the antichrist.

“Hotel” and “Apocalypse” director James Patrick March — As serial killer March in the vampire-and-ghost-themed “Hotel,” Peters got his first chance to play a completely evil character. The rich oil businessman took pleasure in twirling his mustache as he murdered his way to the top, including his own wife The Countess (Lady Gaga) when she betrayed him. Peters had a great time playing this character, thanks in no small part to March’s distinct transatlantic accent.

Kit Walker (“Asylum”) – Unlike the other roles noted above, in “Asylum,” Peters played a victim, a man wrongfully convicted of murdering his wife. Kit was condemned to a sanitarium, where he immediately won the affections of his fellow inmates as well as domestic audiences. As they tried to live, the character made close friends with journalist Lana Winters (Paulson), and his trip brought him face-to-face with creatures and aliens.

“Double Feature: Red Tide,” Austin Sommers — As Austin, a playwright who visits the little New England town of Provincetown, Massachusetts every winter for some R&R&B — rest, relaxation, and blood-sucking – Peters really embraced his goofy side. He and his partner in crime, novelist Belle Noir (Frances Conroy), get their incredible genius by taking black pills, but as a side effect, they are forced to swallow human blood. Austin also enjoyed singing karaoke and performing in drag.

American Horror Story has returned to FX for its tenth season, dubbed “Double Feature.” It also saw the return of Evan Peters as the film’s second-billed lead, trailing only the legendary Sarah Paulson, although he wasn’t merely listed as an actor. Peters was also given a “producer” credit, and fans reacted positively to the joyful news.

Evan Peters returned to American Horror Story: Double Feature after missing the ninth season, 1984. That was the first season of AHS that Peters missed, therefore it had been nearly three years since Evan Peters had last had a role (or roles) in an AHS season. So, his return for Double Feature would have been fantastic for fans regardless, but the producer credit prompted viewers to exult on social media. 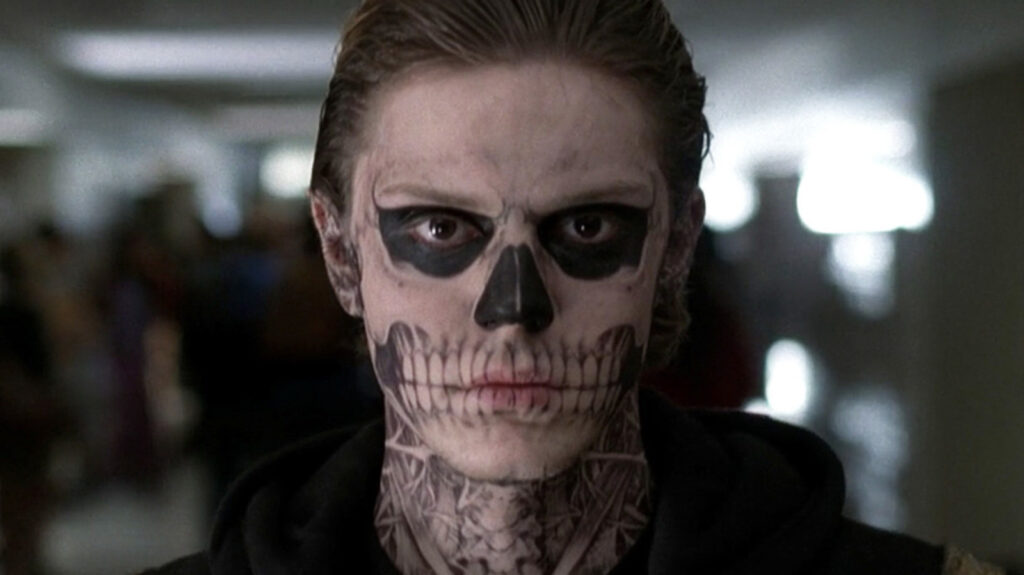