What Human Emotion Are You Quiz

Take this What Human Emotion Are You quiz to find out which one you are. We update the quiz regularly and it’s the most accurate among the other quizzes.

There are numerous types of emotions that influence how we live and interact with others. We may appear to be ruled by our emotions at times. The emotions we are experiencing at any given time influence the decisions we make, the actions we take, and the perceptions we have.

During the 1970s, psychologist Paul Eckman identified six basic emotions that he claimed were shared by all human cultures. He identified happiness, sadness, disgust, fear, surprise, and anger as emotions. Later on, he added pride, shame, embarrassment, and excitement to his list of basic emotions.

According to a 2017 study, there are far more basic emotions than previously thought.

Researchers identified 27 different categories of emotion in their study, which was published in the Proceedings of the National Academy of Sciences.

Rather than being completely distinct, the researchers discovered that people experience these emotions on a scale. Let’s take a closer look at some of the most basic types of emotions and investigate their impact on human behavior. Also, you must try to play this What Human Emotion Are You Quiz.

What Human Emotion Are You?

Happiness is the most sought-after emotion. Happiness is frequently defined as a pleasant emotional state marked by feelings of contentment, joy, gratification, satisfaction, and well-being.

Since the 1960s, there has been a significant increase in happiness research across a variety of disciplines, including the branch of psychology known as positive psychology. This emotion is sometimes expressed as follows:

Sadness is another type of emotion that is frequently defined as a transient emotional state characterized by feelings of disappointment, grief, hopelessness, disinterest, and depression.

Sadness, like other emotions, is something that everyone feels from time to time. People can experience prolonged and severe periods of sadness in some cases, which can lead to depression. Sadness can be expressed in a variety of ways, such as:

Fear is a strong emotion that can be useful in survival situations. When you are confronted with a threat and experience fear, your body goes through what is known as the fight or flight response.

Your muscles tense, your heart rate and respiration rate increase and your mind become more alert, priming your body to either flee or fight.

This response ensures that you are ready to deal with threats in your environment. Examples of this type of emotion include:

About the Human emotion quiz

Disgust is yet another of Eckman’s original six basic emotions. Disgust can be expressed in a variety of ways, including:

This feeling of revulsion can be triggered by a variety of factors, including an unpleasant taste, sight, or smell. Researchers believe that this emotion evolved as a reaction to potentially harmful or fatal foods. Disgust is a common reaction when people smell or taste spoiled foods, for example.

Anger is a particularly strong emotion that is characterized by feelings of hostility, agitation, frustration, and antagonism toward others. Anger, like fear, can influence your body’s fight or flight response.

When faced with a threat that makes you angry, you may feel compelled to defend yourself. Anger is frequently manifested as:

Surprise is one of the six basic types of human emotions first described by Eckman. Surprise is typically brief and is characterized by a physiological startle response in the aftermath of something unexpected.

This emotion can be either positive, negative, or neutral. Someone jumping out from behind a tree and scaring you as you walk to your car at night, for example, could be an unpleasant surprise. 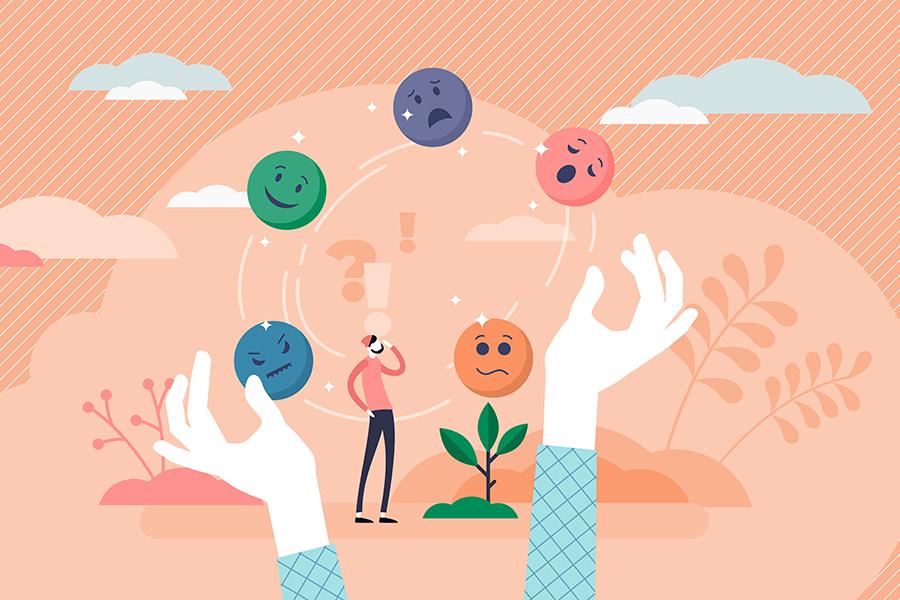