The Power Of The Dog Quiz – Which Character Are You?

Take this The Power Of The Dog Quiz to find out which character you are. We update the quiz regularly and it’s the most accurate among the other quizzes.

Benedict Cumberbatch isn’t the first actor that comes to mind when thinking of casting a Western, but in Jane Campion’s superb drama “The Power of the Dog,” he’s exactly what the film needs. For most of the film, he is covered in filth from head to toe, evoking a figure experiencing a masculinity crisis. He’s always trying to prove that he’s the roughest, hardest leader in a wolf pack of cowboys, presumably to disguise his devotion and affection for the long-gone guy who taught him more than just how to ride a horse.

Phil (Cumberbatch) rules the pecking order in whatever room he enters with nasty remarks and a disregard for authority. His eyes are as frigid as mountain air, his face is as hard as stone, and his tongue is as sharp as a snake fang. Cumberbatch’s eccentric and lovable avatars of the past vanish. Cumberbatch is possibly more terrifying here, coiled like a predator in wait than he was as his deep-voiced baddies in “The Hobbit” and “Star Trek Into Darkness.” He sweeps around the film like an unsheathed weapon, cutting everyone who gets too close. Also, you must try to play this The Power Of The Dog Quiz.

The Power Of The Dog Quiz

Cumberbatch’s Phil is the rough-hewn Remus to the film’s gentler Romulus, his brother George (Jesse Plemons). Whereas Phil is calloused and harsh, George is kinder and more soft-spoken, and he is frequently the target of his brother’s taunting. At a rest stop, Phil teases Rose (Kirsten Dunst), the restaurant’s widow, and her son Peter (Kodi Smit-McPhee), whom Phil bullies until Peter quits off the job and leaves his mother in tears. George reaches out to console her and falls in love with her. This enrages Phil, who is still reeling over the death of his brother to a woman. He intensifies his terror of Rose and Peter as if using a magnifying glass to increase the heat. That is until Peter makes an attempt to spend more time with Phil. The unexpected friendship reveals a multitude of secrets and hidden intents, altering everyone’s connection with one another.

Using New Zealand as the setting for 1920s Montana, writer/director Campion places this quiet-yet-angry Western against a rugged backdrop that is both gorgeous and threatening. It represents harsh masculinity that Peter must learn to overcome. This windswept wilderness is a getaway for Phil from the world of privilege he despises. He found himself on the back of a horse, and it was on those cow lanes, mountain passes, and hidden rivers that he learned to conceal his desires.

Campion’s adaptation of Thomas Savage’s novel of the same name removes the book of many nuances and reduces it to its most raw, in-the-moment parts. If any backstory is given at all, it is given fast and briefly in dialogue. There are no flashbacks, just a few sequences in which characters discuss their pasts with one another. In their close-ups, Campion and her cinematographer Ari Wegner create entire character studies. From this vantage point, we get a feeling of what the characters may never express verbally. It’s in Rose’s pained and scared expression when she starts drinking after another round of Phil’s pestering. When Phil is being picked on, Peter shoots him with steely glares. It’s in George’s downward gazes to the floor, knowing he can’t halt his brother’s tortures. Phil’s fury is visible on his face as he understands his close relationship with his brother is coming to an end with George’s marriage to Rose. It’s a technique Campion has taken in previous works such as “An Angel at My Table” and “The Piano,” the latter of which follows a main character, Ada (Holly Hunter), who cannot talk but communicates through her face and strongly gestured sign language. There is no mistake when Ada has something to say in “The Piano,” yet Cumberbatch also conveys volumes with every scowl and defiant smirk through Phil’s movement, body language, and emotions. 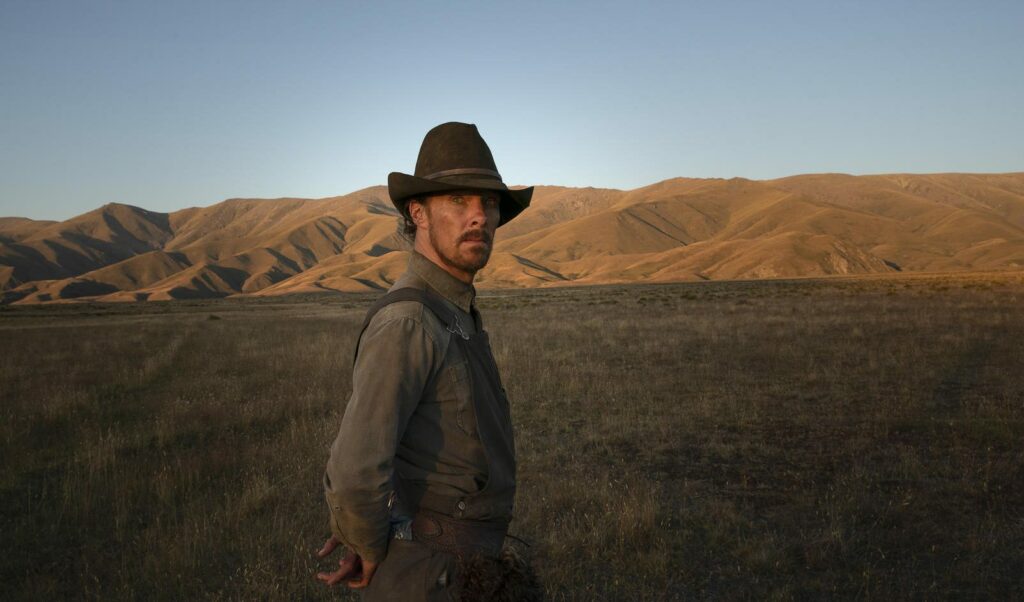