School For Good And Evil Quiz – Which Character Are You?

Take this School For Good And Evil Quiz to find out which character you are. We update the quiz regularly and it’s the most accurate among the other quizzes.

The story takes place in the village of Gavaldon, where two children vanish every four years, never to be seen again. The children of the village have discovered that those who vanish eventually appear in fairy tales sold at the local book store, with each child playing either a ‘Hero’ or a ‘Villain.’

Agatha and Sophie, the two protagonists, are best friends and a perfect fit for these tropes. Sophie wishes to be carried off to the legendary’school for good,’ where she can become a princess, but Agatha is opposed to the’school for evil.’

The two girls are kidnapped, but Sophie is sent to the evil school and Agatha to the good school, which is the polar opposite of what they expected. Neither of them fits in during their lessons, but they have no choice but to continue and no way out.

Sophie and Agatha fall apart during the lessons and events where the two schools collide, but Sophie begins to fall in love with one of the Princes of the school of good, Tedros. Also, you will find out which character are you in this School For Good And Evil quiz.

School For Good And Evil Quiz

In an attempt to return home, the two girls break into the schoolmaster’s tower and are given a riddle. Agatha believes that love is the answer to the riddle and attempts to help Sophie and Tedros fall in love by convincing him that Sophie was placed in the wrong school.

Sophie and Tedros start having problems, and a fight breaks out between the two schools, instigated by Sophie, who is becoming uglier with each horrifying act. As evil begins to fill her, she has dreams in which Agatha reveals herself to be the antagonist in her fairy tale.

Agatha kisses Sophie goodbye, but because she had a pure, heroic love for Sophie, she resurrects her.

She wishes to be abducted by “the School Master,” who will eventually transform her into a princess.

He is a fictional “red-eyed thief with a beast’s body” who kidnaps children and transports them to “The School for Good and Evil.”

Belle is a flawless child who takes exceptional and affectionate care of her father and feeds ‘the poor hag.’ She is Sophie’s rival in the abduction.

He’s an unappealing young man who stalks Sophie. He wishes to be Sophie’s companion, but Sophie is not taken with him.

Sophie’s valued comrade who lives in the cemetery. Because of her attire and peculiar bearing, she is regarded as a disagreeable witch.

He does not agree with Sophie’s kidnapping and believes the fairy tales are complete nonsense. 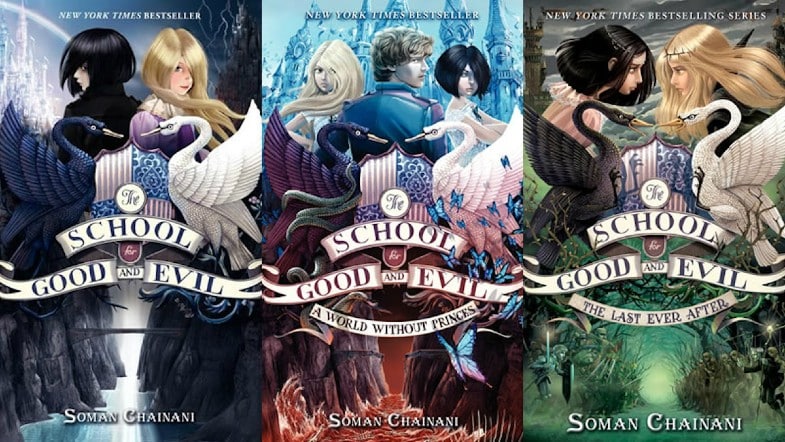