Take this Name The Youtuber Quiz to find out how many of them you know. We update the quiz regularly and it’s the most accurate among the other quizzes.

Were you too wondering who controls the global digital platform YouTube? We took a peek and discovered the Top 12 influencers that are acing the social network with their viral videos, based on the number of followers to their channels. We have eliminated from this YouTube ranking any celebrities, performers, or other famous figures who did not earn fame through the platform itself. T-series, for example, is an Indian film production and distribution company that has over 156 million users. We did not define this company as a “YouTuber,” hence we did not include it in our pick.

Felix Kjellberg is a Swedish gamer located in the United Kingdom who has been hosting this channel since 2010. He is YouTube’s number one in terms of popularity and subscriber count, and he has reigned for quite some time, despite competition from other well-known YouTubers, most notably Smosh. He is mostly a gaming influencer, but he also enjoys comedy sketches and Vlogs, and he recently wrote a book. Also, you must try to play this Name The Youtuber Quiz.

This channel focuses on Diana, a 6-year-old girl who enjoys playing with her family, especially her brother Roma, and her friends. With toy unboxings, stories, and games, this tiny Ukrainian girl soon rose to dominance in YouTube’s children’s entertainment realm.

Nastya and her adorable vlogs are still in the kid’s orbit, and she’s not far behind Diana. Nastya chronicles her daily life in her vlogs, covering new toys, family games, and excursions with her pals, and has become Russia’s most subscribed to channel. Furthermore, this channel is just one of many that Nastya and her family run: Like Nastya Vlog and Like Nastya Show, for example, have millions of subscribers.

Another children’s channel demonstrates the genre’s great popularity. This is the story of Russian-American brothers Vlad and Niki, who live in Dubai and enjoy playing video games with their mother. Sergey and Victoria Vashketov, the channel’s owners, use animation and music to tailor each program to young children. They have 16 channels and translate the information into 13 languages, gaining more than 112 million members in total and demonstrating the incredible growth of this barely three-year-old channel!

This is one of YouTube’s most unexpected, brilliant, and attention-grabbing channels, having debuted in 2012. Jimmy Donaldson of the United States is well-known for his viral exploits, such as eating the world’s largest piece of pizza, and charity stunts, such as giving away $1 million dollars with only one minute to spend them. It’s difficult not to be lured in by these unique and remarkable videos!

This sports entertainment channel was founded in 2009 by “5 closest buddies” from Texas. It features a variety of sports as well as a healthy dose of humor. It started with basketball trick shot videos, but now the entrepreneurs generate videos on a variety of sports, as well as nerf battles, amusing stereotypes, and a variety of trick shots. Their enormous success can be attributed to their one-of-a-kind blend of athletics and humor.

Germán Garmendia is Chile’s most popular YouTuber. He began as an actor and singer, releasing comedy sketches and vlogs, while his second channel, JuegaGerman, created in 2013, is primarily focused on gaming videos, though it has grown into comedy. Even though he hasn’t posted on his initial channel in years, it still ranks high on YouTube and was only recently surpassed by JuegaGerman, which is still regularly updated. 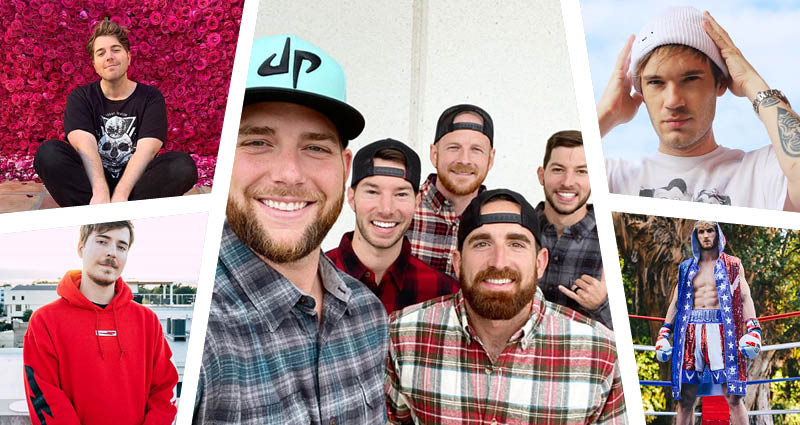