Basic White Girl Quiz – How Basic Are You?

Take this Basic White Girl Quiz to find out how basic are you. We update the quiz regularly and it’s the most accurate among the other quizzes.

You adore Starbucks almost as much as your least favorite family member.
Don’t be embarrassed; venti frappuccinos have done more for you than your douchey cousin Zach will ever do. While I’ve managed to avoid Instagramming my beverages, I have achieved Starbucks ‘Gold Card’ status by visiting the store frequently enough to make my clothes smell like coffee beans. If white chicks had a sponsor, it would probably be Starbucks, as this is the product they are most well-known for supporting in multiple photographs run through every Instagram filter.

You cite Marilyn Monroe… Even if it isn’t Marilyn Monroe you’re quoting.
Hey, I spent years thinking Tupac yelled “F-CK bitches, get money” when it was actually Biggie, so I understand being completely mistaken about who said anything.

You’re a fan of Pretty Little Liars.
Can you keep a secret I’ve given you? I binge-watched Pretty Little Liars for around two seasons and really enjoyed it. I’d just finished Breaking Bad and was browsing Netflix in a vulnerable position — one thing led to another and Ashley Benson was all over the screen, so I stayed, possibly for too long. Also, you must try to play this Basic White Girl Quiz.

You’re a huge Katy Perry fan.
My go-to justifications for listening to Katy Perry’s music and watching Katy Perry’s videos are “I just like the beat” and “I’m just hate-watching it.” In these moments of deception, I envy white girls who can listen to any artist they want without fear of being judged.

You enjoy the Cupid Shuffle, Cha Cha Slide (Part 2), and wobbling.
Something about music with explicit directions appeals to white chicks, and I’m right there with them, performing my right foot two stomps and left foot two stomps with zeal.

You forget about close friends’ birthdays, but you know when Pumpkin Spice lattes are back.
But, truly, why can’t we have pumpkin-flavored EVERYTHING available all year?

You’re a fan of leggings, yoga pants, Victoria’s Secret, and The North Face.
White girls adore these companies and types of apparel, and while I can appreciate their existence from afar, I have no idea how comfortable yoga pants or leggings are to wear. Wearing The North Face is my best bet at dressing like a white girl until men’s fashion takes a severe shift.

You take great delight in being able to quote Mean Girls.
It’s almost second nature for you to blurt out phrases in reaction to any relevant statement. I’ve yelled “She doesn’t even come here!” at the most inconvenient times, and I don’t regret it one bit.

You’ve probably driven a bug at some point.
When my rusted, aged Cavalier died on me years ago, the only option was to borrow a VW Beetle. During the brief time I used it, there was one moment when, as I approached a red light, a mother and what I assume was her teenage daughter pointed and laughed at me. The longest 20 seconds ever spent at a stoplight. This is a true story. Apparently, driving bright red bugs isn’t a societal standard for brothas, so would you rather be a stereotype or a spectacle?

You adore being tanned.
Although I was born 27 shades darker than the average white girl, I understand. Giving yourself a brown skin tone is undoubtedly a lot of fun, as long as no one can tell there’s a white woman below the bronzer.

You liked Pitch Perfect and had already practiced the cup song.
There’s the fact that it’s a hilarious, quotable film, but then there’s the cup song. If you’ve ever searched YouTube for a cup song tutorial and found yourself on the verge of tears due to sheer frustration after failing terribly, you’re a member of the stereotyped white girl club. 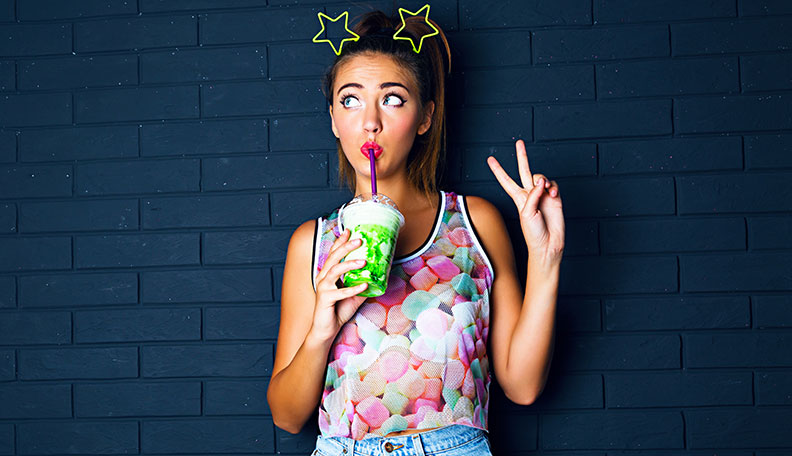