Take this Don Quixote Quiz to find out how well you remember the book. Answer these quick questions to find out. Play it now!

Middle-aged male Don Quixote is from the La Mancha region of central Spain. He decides to use his lance and sword to protect the defenseless and slay the evil because he is obsessed with the chivalrous values extolled in the novels he has read. After a first unsuccessful expedition, he embarks on a second one with Sancho Panza, a slightly bewildered laborer whom he has persuaded to accompany him as his obedient squire. Don Quixote offers to make Sancho the wealthy ruler of an island in exchange for Sancho’s assistance. Don Quixote travels the highways of Spain on his horse, Rocinante, an aged barn nag, in search of fame and great adventure. In the name of Dulcinea del Toboso, a peasant woman he imagines as a princess, he forgoes food, shelter, and comfort.

Rather than acting as a hero on his second trip, Don Quixote turns into a robber, robbing and harming bewildered and reasonably enraged citizens while defending himself against perceived dangers to the world or his knighthood. Because the farmer swears an oath not to hurt the boy, Don Quixote abandons the boy and throws him over to the farmer’s malicious hands. He steals a barber’s basin that he thinks is the mythical Mambrino’s helmet, and he comes to believe that the Balsam of Fierbras, an elixir that makes him so sick that, by comparison, he subsequently feels healed, has healing properties. Sancho supports Don Quixote and frequently takes the brunt of the consequences of his actions. This Don Quixote quiz will help you remember certain details.

The tales of the people Don Quixote encounters along the way are part of the tale of his adventures. Don Quixote attends the funeral of a student who passed away because of his love for an unflattering woman who later became a shepherdess. He unintentionally brings together two grieving couples—Cardenio and Lucinda and Ferdinand and Dorothea—while freeing the evil and cunning galley slave Gines de Pasamonte. The four lovers are ultimately reunited at an inn where Don Quixote is sleeping and has a dream about fighting a giant after being torn apart by Ferdinand’s betrayal. Also, you must try to play this Don Quixote quiz.

Hero of the tragicomic novel. The major goal of Don Quixote’s life is to restore knight-errantry in a society devoid of chivalric ideals and principles. He has extremely different views on the world than other people and only believes what he chooses to believe. He wants to save the world and is sincere, honorable, proud, and idealistic. Don Quixote, who is as clever as he is crazy, begins as a ludicrous and lonely figure and ends up as a pitiful and endearing old man whose strength and knowledge have abandoned him.

The peasant laborer Don Quixote adopts as his squire is greedy but compassionate, faithful but cowardly. Sancho, who stands in for the average person, serves as a contrast to Don Quixote and almost all of the other characters in the story. His proverb-filled peasant wisdom and selfless Christian behavior turn out to be the most enlightening and respectable worldview in the book. Although Sancho is awestruck by Don Quixote, he develops a sassy, self-assured personality and ends the book by giving his master advice on subjects of profound personal philosophy.

Horse in Don Quixote’s stable. Slow but obedient Rocinante is just as tired out as Don Quixote.

The steed of Sancho. Much debate surrounds Dapple’s absence and reappearance, both within the narrative and in Don Quixote literary study.

About the Don Quixote quiz

15 multiple-choice questions in the free Don Quixote quiz below will help you gauge your knowledge of the book. Determine which chapters, ideas, and writing techniques you already understand, as well as what you still need to learn in preparation for your forthcoming essay, midterm, or final test. Now take the free test! 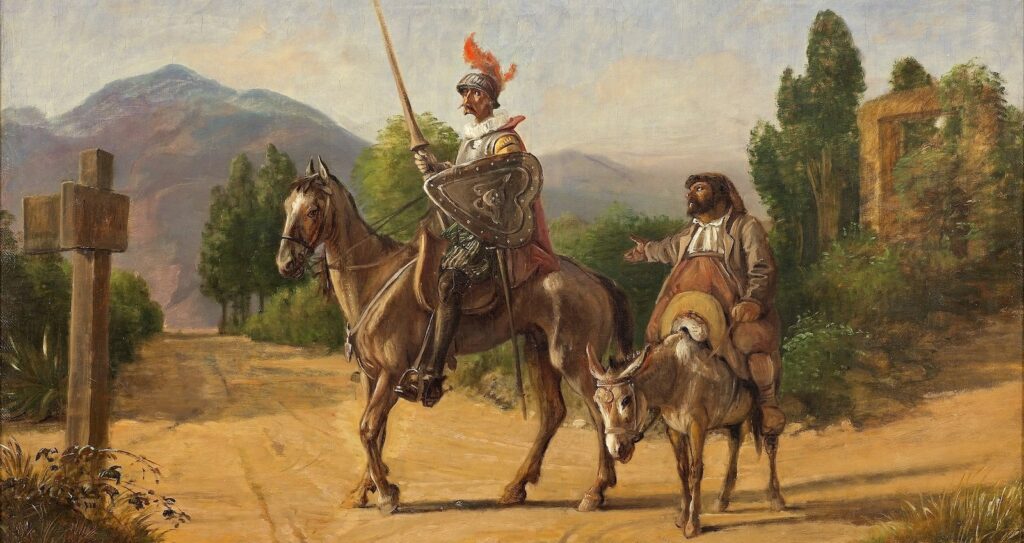