Take this Celtic Quiz to find out how much you know Celtic FC. We update the quiz regularly and it’s the most accurate among the other quizzes.

Celtic, founded in 1888 and based in Glasgow’s East End, was formed to raise funds for the “Poor Children’s Dinner Table” charity.

A year later, the club played its first official match against Rangers, establishing a rivalry based as much on political and religious differences as on on-field disputes.

In the 1890s, the two teams gathered the majority of Glasgow supporters, earning them the moniker Old Firm. Celtic was the more successful of the two clubs for the first few decades, winning 17 Scottish Championships and 12 Scottish Cups until 1927.

Crowd disorders would result from the Glaswegians’ strong desire for football and the city’s problematic social conditions. Aside from the unique social situation, the emergence of “brake clubs” in the 1880s, which can be viewed as a precursor to hooliganism, would contribute to this. The brake clubs were the first organized away fans, traveling in horse-drawn carriages (also known as brakes, thus the name brake club). The first brake club was established in Glasgow’s east end. Also, you must try to play this Celtic Quiz.

Rangers came in second. Even with Jimmy McGrory as a focal point of their attack, Celtic gradually found itself on the back foot in a battle with Rangers. Celtic won the Scottish Championship only three times over the next four decades, a far cry from their early-century dominance. During this time, they also won five Scottish Cups, but it was a small consolation for the disappointed fans.

When Jock Stein took over as manager in 1965, everything changed for the better. From 1966 to 1974, Stein’s undeniable charisma and influence transformed Celtic’s underperforming team into a machine that won nine consecutive Scottish Championships. Celtic won every competition they competed in during the 1967 season, including becoming the first non-Latin team to win the European Cup.

Stein retired from the club in 1978 after winning ten Scottish Championships, eight Scottish Cups, and a European Cup.

Before the end of the 1980s, Celtic had won five more Scottish Championships and four Scottish Cups. However, the early 1990s proved to be a period of decline, with the club coming perilously close to bankruptcy due to numerous financial difficulties. Fergus McCann, a businessman, eventually saved them by taking over the club and listing it on the stock exchange. This turn of events helped Celtic get back on track, winning the Scottish Cup in 1995 and the Scottish Championship in 1998.

Martin O’Neill took over as manager in 2000 and led the club to a Double in his first season. This would soon prove to be another watershed moment in Celtic’s history, as the club went on to win ten Scottish Championships and six Scottish Cups in the years that followed, supplanting Rangers as the country’s most dominant club.

Celtic FC plays their home games at Glasgow’s famous Celtic Park in the Parkhead neighborhood. Celtic Park has a capacity of 60,411 people, making it the largest stadium in Scotland and the eighth-largest stadium in the United Kingdom. Celtic Park, also known as Parkhead or Paradise, is known for its lively and intense atmosphere. It is widely regarded as one of Europe’s loudest stadiums, and Celtic fans are widely regarded as the most ardent supporters in all of Britain and Europe.

Celtic FC founded the club newspaper in Britain in August 1965, with The Celtic View. Founder Jack McGinn began the club’s weekly publication with only four pages. The Celtic View established the standard for British football club journalism, and most major clubs followed suit.

Celtic FC’s traditions are incomplete without mentioning their long-standing rivalry with Rangers. Celtic FC vs. Rangers, known as the “Old Firm,” is still regarded as one of the world’s most important football derbies.

Celtic and Rangers have historically dominated Scottish football. Since its inception in 1980, these two clubs have shared 101 Scottish Premiership titles, leaving only 19 championships for other teams in Scotland. 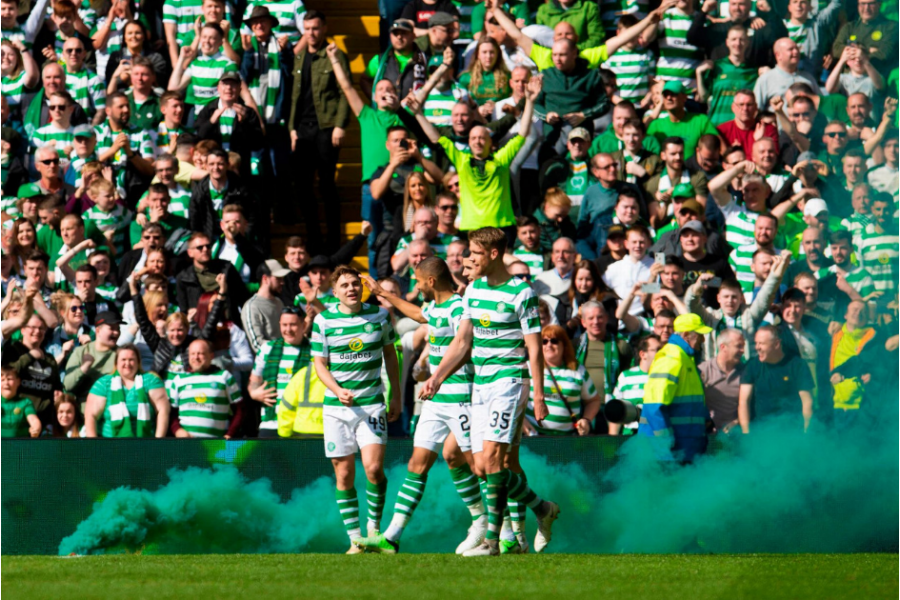