Take this Which Trolls Movie Character Are You quiz to find out. We update the quiz regularly and it’s the most accurate among the other quizzes.

“Trolls” is a sugar-high “Shrek,” an aggressively auto-tuned animated amusement ride for easily distracted times. Imagine being locked in a 3-D bouncy castle while being blasted with glitter, sparkles, rainbows, unicorns, marshmallows, and cupcakes as Day-Glo forest creatures, modeled on those cheerful naked dolls with untamed cotton-candy tresses that were popular in the 1960s, try to bliss you into submission.

Yes, most youngsters are unlikely to notice that this bejeweled delicacy is reminiscent of a particular fairy-tale-skewering franchise centered on a moody green ogre that catapulted DreamWorks, the firm also responsible for “Trolls,” into a ‘toon superpower. The switcheroo here is that there are two unhappy males who are saved by their love partners, while the ladies save the day. Also, you must try to play this Which Trolls Movie Character Are You quiz.

Which Trolls Movie Character Are You?

For all of its brutal parody of a particular competitor’s legacy, the original “Shrek” had a throbbing heart and an expansive spirit, as evidenced by its then-novel use of the sad ballad “Hallelujah” in its redemption story. Meanwhile, “Trolls” is a derivative madcap money engine designed to ensure that DreamWorks, which has had few hits other than sequels in recent years, has a fresh pipeline of consistent revenue. Simply watching the end credits will reveal how many bodies were devoted to securing licensing arrangements (Target.com alone lists 165 tie-in products).

Even with its rather conventional message that the power to be happy lives inside all of us, kids and a few adults are unlikely to care that this visual simulation of mindlessly devouring an entire bowl full of Skittles and Starbursts in one sitting is essentially hollow on the inside. We are only humans, and it will be difficult to resist the pre-fabricated false attractions of an escapist musical fantasia that spends the majority of its brilliance in its outrageously infectious soundtrack. The oldies rely largely on re-imagined staples from every wedding reception conducted since the 1980s: “September,” “I’m Coming Out,” “Total Eclipse of the Heart,” “Hello,” “True Colors,” and even “It’s a Sunshine Day” from the Brady Bunch.

Most of these beat-heavy jams are made all the more catchy by being primarily sung to worm-hole perfection by the film’s two melodically-endowed lead voice actors: Anna Kendrick in prime “Pitch Perfect” form and Justin Timberlake, whose self-penned “Can’t Stop the Feeling” just might be the new “Everything Is Awesome” in terms of being impossible not to spontaneously hum days after leaving the theater.

But what about the plot, you might ask? Once upon a time, as depicted scrapbook-style with tactile felt cutouts, there existed a race of teeny-tiny super-cute trolls whose entire lives revolved around singing, dancing, and group embraces performed every hour. Unfortunately, their happy existence is cut short once a year by their sourpuss enemy neighbors known as the Bergens, a warty tribe of giants with terrible posture, wonky teeth, and bad attitudes whose town appears to be decked out in what can only be described as sewage chic.

This group of grumpy people celebrates Trollstice, a holiday in which they allow themselves to be cheerful for one day by eating sweet-tasting trolls. Yes, cannibalism is discussed here, but it is only threatened, not observed. One year, King Peppy (Jeffrey Tambor) decides to fight back with the war cry “No troll left behind,” and devises a method for his multi-colored subjects to evacuate to safety. They’ve gone uneaten for two decades—until royal daughter Poppy (Kendrick) throws a raucous rave party complete with pyrotechnics. Branch (Timberlake), the Trollhood’s Chicken Little, who is so depressed that he is the color of mud, cautions that the ruckus would attract the attention of their foes. Soon after, Bergen villainess Chef (Christine Baranski, channeling Carol Burnett) descends on the children and takes up a bunch to give to King Gristle (Christopher Mintz-Plasse), who has never felt happier.

Off Poppy sets out to help her buddies, swatting at strange beasties along the way, and is soon joined by a reluctant Branch. Opposites attract friction between the couple, who eventually decide to enlist the help of a Bergen scullery girl named Bridget, who has a crush on the king, to distract him long enough for the other trolls to escape. Of course, a Cinderella-style beauty makeover takes place—swoopy troll hair is involved—but a Bergen can only do so much. 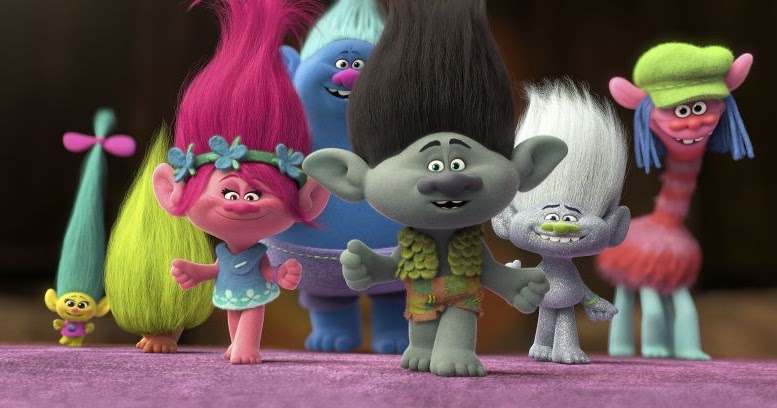