Which Rugby Position Are You Quiz

Take this Which Rugby Position Are You Quiz to find out. We update the quiz regularly and it’s the most accurate among the other quizzes.

Props for Loosehead and Tighthead
The loose-head and tight-head props, along with the hooker, form what is known as the front row, which refers to their rugby positions in the scrum.
Both props must be incredibly strong in the neck, shoulders, upper body, and legs to be successful, and they must enjoy head-to-head competition.

The props not only prevent their side of the scrum from going backward, but they also support the hooker’s body weight, allowing him or her to see and strike the ball when it is placed in the scrum. Props should be able to support or raise the jumper in the lineout to prevent the opposition from winning the ball.

Away from set-pieces, props help to secure the ball after a player has been tackled, therefore it is advantageous if they can mix their power with some movement. They are also frequently utilized as battering rams in attack, taking short passes, and slamming into the opposing defense at high speeds in an attempt to occupy the defenders and create space for the more athletic players. Also, you must try to play this Which Rugby Position Are You Quiz.

Which Rugby Position Are You Quiz

Hooker
The hooker, who lines up in the scrum between the two props, is a critical decision-maker for the forwards. He or she will control the scrum’s timing and is also in charge of gaining possession in the scrummage by hooking the ball back through the props’ legs.

At the lineout, he or she is in charge of tossing the ball in and must be able to hit the lineout jumper who is expecting the ball with accuracy. In open play, the hooker functions similarly to the props, securing possession during rucks and mauls and making short ‘crash’ passes.

Second Row/Lock
The second-row forwards (also known as locks) are the scrum’s engine room and the lineout’s target men, so they must be big, powerful players with exceptional scrummaging skill and precision timing.

If they bind to one other and the props too loosely in the scrum, their pack will lose power, and if their lineout jumping is not accurate and dynamic, the opposition forwards will be able to grab the ball. In open play, the second row’s role has changed from that of a support player in rucks and mauls to that of a ball carrier.

Wing Forward/Flanker
Flankers are frequently seen as the players with the fewest specific responsibilities, but as such, they must be outstanding all-rounders with boundless energy. Speed, strength, fitness, tackling, and handling abilities are all essential.

They are frequently at the center of the action, winning balls at the ruck and maul, collecting short passes from tackled players, and making their own major tackles in open play. While they are rarely to blame for a loss, they can undoubtedly make the difference between win and defeat.

The eighth number
Support play, tackling, and ball-carrying are the No.8’s specialties, therefore his or her responsibilities are identical to those of the two flankers. The trio forms a unit known as the back row.

Binding on right at the back of the scrum, the No.8 is also the only forward allowed to pick up the ball from the scrum’s base.

Scrum-Half
The scrum-half, who serves as a link between the forwards and the backs, is one of the most important rugby positions when it comes to putting together attacks. A skilled scrum-half, who plays just behind the forwards, will have complete control over when the ball is passed out to the backs from the back of a scrum, ruck, or maul.

The playmaker must have excellent vision, speed, and awareness, as well as fast hands and lightning responses. They are usually one of the smaller players on the field and must rely on the protection of their own forwards. An indecisive or inadequately protected scrum-half is easy prey for a ferocious opposing flanker.

Take to the skies!
The team’s heartbeat and possibly the most influential player on the field. Almost every attack will go through the fly-half, who must also decide when to send the ball to the centers and when to kick for position.

A number 10 must organize the team’s backline, determining which practiced moves to use and react to defensive gaps. The fly-half must also be able to relieve territorial pressure by kicking into touch down the field, and is frequently the team’s designated placekicker for conversions, penalties, and drop goal attempts. 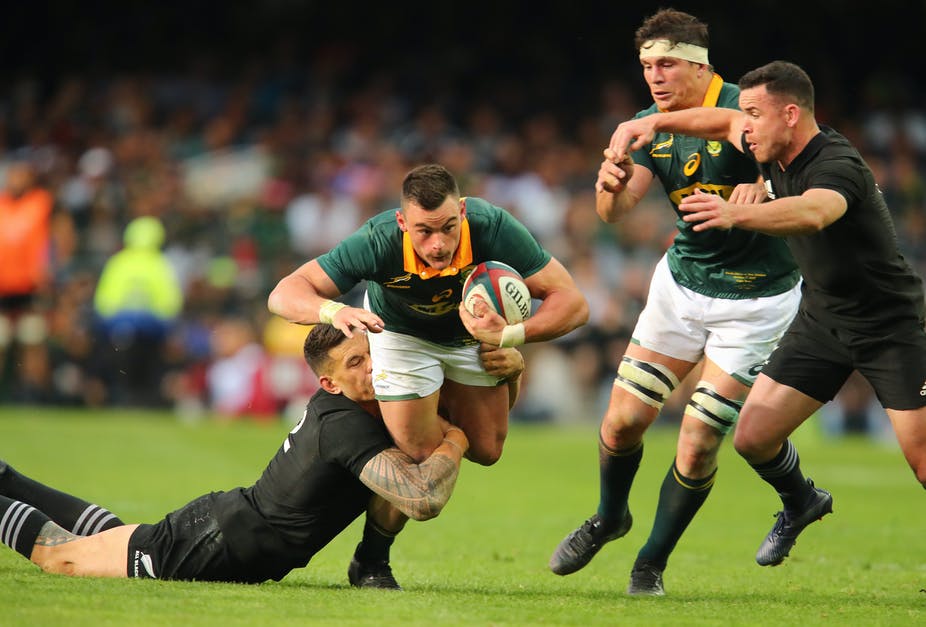