Parallel Mothers Movie Quiz – Which Character Are You?

Take this Parallel Mothers Movie Quiz to find out which character you are. We update the quiz regularly and it’s the most accurate among the other quizzes.

With “Parallel Mothers,” their eighth film together in the last quarter-century, Pedro Almodóvar and Penelope Cruz’s magical connection grows stronger and brighter. The Spanish maestro knows exactly how to coax all of the colors from his charismatic muse, and the veteran star, in turn, takes his material and makes it feel both fiery and grounded.

This time, they’re telling a story that’s both personal and political. It’s an intimate story about two women and their intertwined lives, but it’s also about Spain’s troubled history and how strong women are linked for generations through the past, even as they help each other forge a brighter future. Sounds like a lot, and “Parallel Mothers” is packed with Almodóvar’s trademark melodrama. However, the performances, particularly the interplay between the film’s two very different stars, always make the film feel substantive and authentic. Also, you must try to play this Parallel Mothers Movie Quiz.

Cruz plays Janis, a successful photographer based in Madrid. She becomes pregnant on the verge of 40 as a result of a fling with Arturo (Israel Elejalde), a handsome and charming forensic archaeologist. She gives birth on the same day as another single mother, 17-year-old Ana (the stunning Milena Smit), her hospital roommate. Since those first, kind conversations, the two women have found themselves connecting in a variety of unexpected ways during one of the most vulnerable and exciting times of their lives. They feel the same joy, exhaustion, and other emotions. To go into detail about the many twists and turns Almodóvar takes in “Parallel Mothers,” suffice it to say that they are doozies.

While the bones of his script may appear soapy, and the propulsive, string-heavy score from his frequent composer, the brilliant Alberto Iglesias, at times recalls a horror film, “Parallel Mothers” never devolves into camp. As Janis, Cruz is radiant and earthy, sexy and funny, and because she’s so talented and completely on Almodovar’s wavelength, she maintains an emotional connection with the audience throughout all of her character’s extreme highs and lows. Meanwhile, Smit shines in a more understated role and has a sparky connection with Cruz on multiple levels. Ana isn’t as excited about becoming a mother as Janis is, but her maternal instincts develop in heartwarming and heartbreaking ways. Janis tells Ana repeatedly, “It’ll all work out,” and her bright optimism extends to every aspect of her life, including her wardrobe and décor. The vibrant red we see on everything from her cardigan and camera bag to her stroller and Baby Bjorn is such an Almodovar signature that they should name a nail polish after him. (Several of the director’s longtime collaborators, including production designer Antxón Gómez and cinematographer José Luis Alcaine, return to give “Parallel Mothers” its chic and dramatic look.)

But it wouldn’t be an Almodóvar film without one of his favorite actors, Rossy de Palma (“Women on the Verge of a Nervous Breakdown,” “Tie Me Up! Tie Me Down!”). In this scene, she plays Janis’ best friend, Elena, who comes swooping into her hospital room in a Technicolor-plaid trench coat and generously offers no-nonsense support and advice. Teresa (Aitana Sánchez-Gijón), Ana’s mother, is a narcissistic actress who only truly lights up when she’s talking about how well she did in an audition (though her evolution is one of the film’s many revelations).

As the film’s historical themes emerge, all of these women, and many more, become intertwined. Snippets of conversation about how the Spanish Civil War disrupted and devastated countless lives, interspersed throughout by Almodóvar, eventually come to the fore. These families are still dealing with the aftereffects of their losses decades later. It’s a big, emotional subject for Almodóvar to grapple with, and some of the transitions may feel a little awkward along the way. However, by approaching this subject through the lens of a more personal and relatable story of motherhood and friendship, he makes it more approachable. 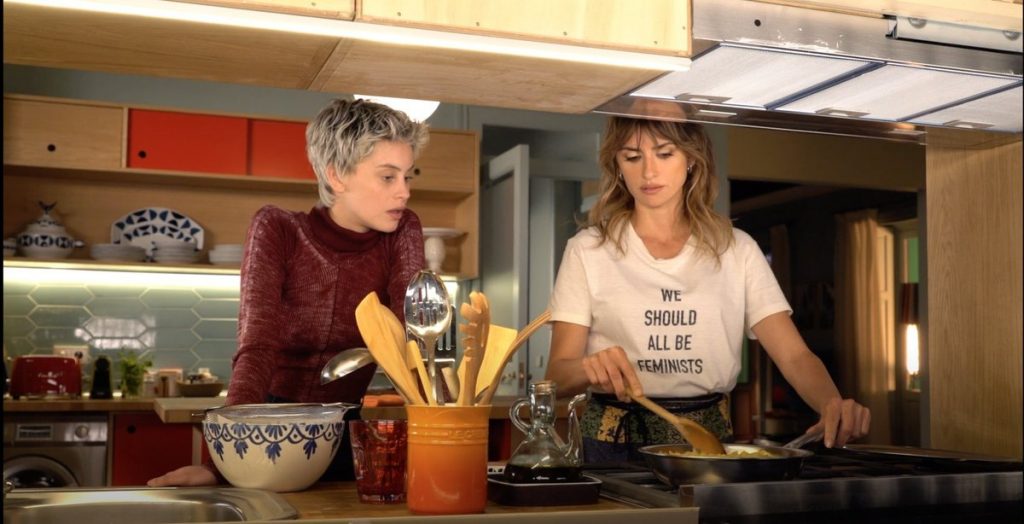